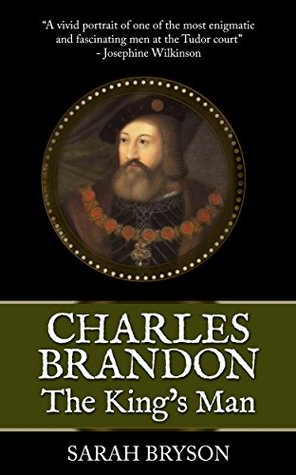 This book will always have a special place in my heart as the book I ended 2016 with. If you have read some of my Tweets from the end of December, you know what a mad dash it was for me to try to get 250 books read, as that had been my Goodreads goal for the year. But on December 31st when I was still 10 books short of my goal (after devouring several quick chick lit and cozy mystery titles), I realized it was not fun to be reading crap (and a few gems) that I really did not care about. So, with a few hours left until midnight, I abandoned my plan and accepted the fact that this year I would not reach my goal. Lucky for me though, I had tons of books about all my favorite people and periods, just waiting for me to start reading about them again.

So, I started with this one and it felt so good to toss the goal aside and read books I wanted to read. I've also had the opportunity to get to know the author, Sarah Bryson, recently as we bonded over similar jobs and children's names (I mention this because I want it to be clear that while we have gotten to know one another, my review is still impartial and truthful as I see it). I am impressed with Bryson's dedication to research on her subject, but expected nothing less, as I had read her previous work about Mary Boleyn for the 'In a Nutshell' series by MadeGlobal.

Bonus: As I was reading, I was picturing Henry Cavill in my head. Even though The Tudors had other major glaring flaws, this was not one of them. Charles Brandon had a really amazing life, and no doubt some of the opportunities he was given were a direct result of the fact that his father, William Brandon, was Henry VII's standard-bearer at Bosworth where he was killed, possibly by Richard III. Charles knew Henry VIII from a young age, despite the age difference of roughly seven years, and they became the best of friends - even with some of the poor decisions Charles made over the course of his life.

Okay, so, yeah we are looking at this through a different lens. but you can't really deny that Brandon made some shady choices in the arena of marriage. His first marriage is a prime example - he's engaged to Anne Brown, but then broke it off to marry her aunt instead, as she was a 'better prospect' due to her wealth. Then he tarted selling off the aunt's lands to pocket the money and eventually had the marriage annulled based on his previous relationship with Anne, who he then went on to marry and have at least one daughter with. I get that this was not uncommon behavior in the 1500s, but it is still shady.

Then, to top it off, Brandon has the nerve to go and marry someone who is an even better "prospect": Mary Tudor, the sister of his BFF Henry VIII. This story never ceases to amaze me. I always wonder if Mary had it in her head that she was going to marry Charles, before being sent off to France to wed the near-dead Louis XII; I'm curious to know how much time they had been able to spend together prior to her arranged marriage and how early they showed an interest in one another. Either way, whether it was a before or after thought, the two were married before arriving back in England after Louis XII's death and big surprise, Henry was piiiiiissed. Never mind the fact that he had supposedly promised Mary that she could choose her own husband the next time around. Either he forgot this little fact, or was so incensed that his sister and BFF went behind his back - which was also treason, btw. You know, marrying someone of royal blood without permission fro the king and all. Brandon was very lucky to have had Wolsey intervene on his behalf with Henry, or he could have been executed. Instead, he had to pay a rather substantial fine, and all was well again, more or less. As an aside, Brandon was one to switch loyalty when it best suited him. As Court slowly turned on Wolsey for not being able to secure the divorce for Henry, I was glad to see that Brandon was so against Henry marrying Anne. Unfortunately, though he supported Henry doing what he wanted to do, he no longer supported Wolsey, the man who had literally saved his life.

Mary died young though, before she turned 40, and of course Brandon would go on to marry again. This time he wed Catherine Willoughby, who was roughly 14 to his 49. I can't help but feel how opportunistic he was in his marriage dealings. Though, it was a trait that served him well throughout his life, though he seems a bit unscrupulous at times in said dealings and his constant need of money. Brandon and Catherine had two sons, and I had no idea that they had died so young, or even that they died of the sweating sickness. I've always had these glimpses of Brandon when reading other Tudor-period books, but this is the first that I have read that is dedicated solely to Brandon. So many gaps have been filled in for me and I am much more knowledgeable about him specifically now. As for these two sons, I found this quote especially poignant:

"With the death of Henry and Charles Brandon on 14 July, 1551 Brandon's direct name and bloodline ceased. The title of Duke of Suffolk went to Brandon's son-in-law, Henry Grey, husband of Frances Brandon" (55%)

And we all know where THAT went...I see you, Jane Grey.

The author makes fantastic use of several contemporary sources throughout the book. She uses letters written by Brandon, as well as the papal bull that was issued to legitimize his marriage to Mary. The author addresses Brandon's will also and I would like to see it in its entirety. I love that so many of these documents have survived these centuries of civil wars, revolutions and reformations. That we can read these words, written so long ago, is breathtaking - especially when we have the originals and not just copies. I doubt Charles Brandon would have ever believed that 500 years on, people would be so interested in learning about him. To me, portraiture also falls into this category, as highly important documentation. We know for sure certain portraits are of Brandon - at least we are sure we're sure - while others are guesses at best. If only every single artist would have just signed every piece of work they'd ever done and then labeled the portrait with the sitter's name! But that is too much to ask I suppose, and the mystery is half the fun.


One can not tell the story of Henry's BFF without also relating some facts in relation to Anne Boleyn's trial, given that Brandon served on the jury that convicted her. Some authors and historians are so blind to Anne's faults that they suggest incorrectly that yellow was the color of mourning in Spain and that is why she and Henry wore yellow when Catherine of Aragon died. I'm glad to see Bryson dismisses this nonsense as well because there is no way Anne would have even been able to pretend she was in mourning for Catherine. If anything, she knew just how much more tenuous her position had become if she did not have a son. I also felt it was very wise of the author to include the indictment of Anne without going into too many details and detract from who the book was really about. The indictment was presented in a bulleted format for the reader, which is highly beneficial for those wanting to know more about the charges against Anne, but not eager to read the pages and pages of information. Obviously Anne was innocent of most of the charges, but Brandon and every other man sitting on the jury knew that there could be no other verdict but guilty.

At the end of his life, it does not really surprise me that Charles Brandon's wishes in his will were ignored by none other than his BFF Henry VIII. Instead of his own request, Brandon was buried at St. George's Chapel at Windsor, the same place where Henry would one day be laid to rest, along with his "most beloved" wife Jane (i.e. the only one who gave him a son and then had the courtesy to die before he grew tired of her). So, in the end, it begs the question as to why Brandon was so successful in surviving life in Henry's court when so many others did not. The author addresses this question specifically in one of the final chapters and to me, it was because Charles was the ultimate yes-man. I do not mean this in a negative way. Brandon survived while so many other men and women met untimely and gruesome ends because, as Bryson says, "Brandon's greatest quality was not his skill and jousting, nor was it a success in military campaigns, it was his ability to read his king and know how to respond appropriately" (63%). I personally take from this and feel that Brandon was far intelligent than some have given him credit for, especially when saying he preferred physical activities to educational ones. Basically, in public Brandon went along with whatever Henry thought or wanted, despite what he personally might have felt was right or wrong. Those discussions could be in private between the two friends, but never public. This characteristic served Brandon well and he profited from it.

At 63% the main body of text is complete, but there are several section after that are just as useful and informative. The author includes a section called 'Places of Interest', which I love because there are so many Tudor places that still exist that I can't wait to see. Along with this was visitor information. After that is a timeline of Brandon's life and the important events that occurred throughout. I found both the bibliography and notes sections to be incredibly thorough. Again, it shows the commitment to research. I was happy to see both books I have already read and a few new ones to add to my TBR list.

Overall, I highly recommend this book both for those interested in the Tudors in passing, and those like me who are on a mission to read any and every Tudor book we can get our hands on. In this one, the man Charles Brandon becomes real, instead of just the sidekick. This is a must-read.
Posted by Sarah @ All The Book Blog Names Are Taken at 3:51 PM