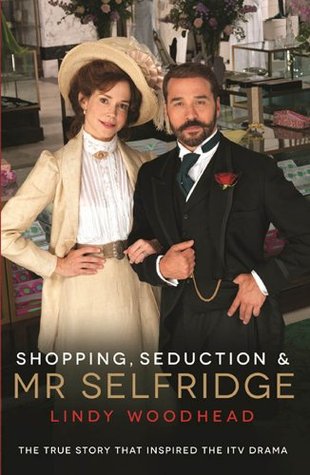 I first learned of Selfridge from a PBS documentary in the last couple years and was forever intrigued by his story - particularly the part where he was eventually banned from his own store, the one he had worked so hard for decades to make into the ultimate shopping destination. He lived an incredible and interesting life, but came to a sad end in being forced out of his store. Selfridge's would not exist or have been as successful as it was without him, that much is obvious from the text. To have someone so forward-thinking, building his empire from the ground up, what a journey.

I not only learned about Selfridge and his own business, but a bit about the time period before he ventured out on his own when he worked at Marshal Field's in Chicago. Seeing Field's store in Chicago during and after the World's Fair in 1893 must have been amazing; Selfridge was very much the showman and the displays he put on must have been just amazing. I think about these times when the World's Fair was still a thing people went to see and department stores were still an all-day destination, and wonder if it would mean as much today? Now with news literally at our fingertips and social media galore, I don't know if these things would hold the same kind of wonder. I think technology has deprived us of a lot of really cool experiences, we are so desensitized to everything - not to mention the Mall of America and other mega malls kind of negate the whole 'department store experience'.

As an aside, which I seem to do a lot in my reviews recently, this book sparked my interest in the fair of 1893. My only knowledge of it thus far comes from this book and Erik Larson's fantastic Devil in the White City. Here I gained a bit more information though, and I will have to look into info about George Ferris, who debuted his Ferris Wheel at the fair, yet had to fund plans and construction costs himself. Due to that heavy burden, Ferris died just three years later alone in a hospital.

My only real gripe about this book has to do with photographs. I loved the ones that were included at the end of the text and being able to see the store and Selfridge in their primes was really cool. I only wish there had been MORE photos, and that they had been included within the text itself wherever the subject of the photo was being discussed, instead of all lumped together at the end. Looking back at my notes, I was already complaining about this in my notes, and that for all the fuss about how grand Selfridge's window displays were, there were zero photos. Given his positive relationship with the press, you know the photos have to exist in an archive somewhere. The author stated at one point that many of the displays "wouldn't look out of date today" (29%). Okay, so...where are they? I was also bothered by the fact that there were numerous mentions of these 12,000 architectural plans for the London store, yet no prints of the plans. Those would have been so cool to see and given the fact that there were so many of them, surely it would have been interesting to explore the differences in some of the plans.

I really kind of feel bad for Selfridge in regards to his personal life, especially in regards to his relationship with Jenny Dolly; what a horrible human being. Reading about some of his female companions and that aspect of his life was difficult, especially because he was so much older than him. On one hand, he made these decisions himself to spend thousands and thousands of dollars on them, but on the other hand given his advanced age, one has to wonder if he really was of sound mind. If not, these women were taking advantage of him. If he was, then I suppose he had the right to spend his money as he wished.

As the book neared its end, I felt bad for him, because I knew what was coming. For so many decades he was on the cutting edge of retail, built this magnificent empire, and made shopping an experience. The firing by his board still makes me angry, he built the place from nothing. Imagine how different things might have turned out for Marshall Field's, and Selfridge himself, had Field approved the name change to include Selfridge.

Overall, I found this an informative and interesting read. I have a bit of a soft spot for Selfridge because of how things ended, and I definitely recommend this read.
Posted by Sarah @ All The Book Blog Names Are Taken at 7:27 PM