John Quincy Adams and the Politics of Slavery: Selections from the Diary 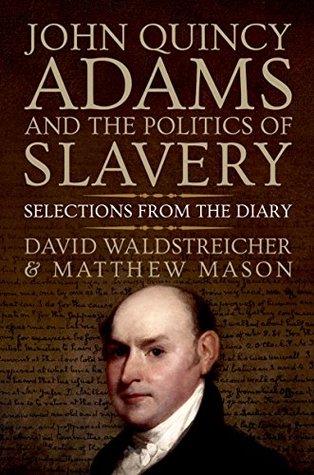 I received this ARC for free via NetGalley from Oxford University Press in exchange for an honest review.

I have to confess my complete lack of knowledge about some of the earliest presidents after Washington. I vaguely thought both John Adams and John Quincy Adams were the only two among the first ten or so who never owned slaves and were staunchly against slavery. I could've sworn I read that previously. But as I started this one, I quickly found that was not the case at all and early on his career, JQA was actually a supporter of this cancerous practice that still impacts our country today. In fact, at around 49%, the books states "The Adamses rented slaves during their years in Washington DC...". This is quite a different picture painted of a man who, in the last years of his life, was so well-known for his opposition to slavery. He was even called by one of his political rivals, Henry Wise, "the acutest, the astutest, the archest enemy of southern slavery that ever existed." This is quite a contrast to how JQA even viewed himself, as he often criticized the abolitionists who didn't think he was going far enough to denounce slavery.

The editors did an excellent job with this volume, first introducing the journal, their purpose for choosing the entries they did, as well as their process for doing so. Throughout the text they also gave summaries and their own insights into many of the entries, explaining the larger politics of the time and events going on while JQA wrote what he did. They also provided commentary in comparing what he was writing in his diary versus what he was saying publicly on the issue of slavery. JQA left the most extensive collection of personal writings than any other statesman in the history of the US. These diaries give us one of the most complete pictures of any of these early politicians and the complexity of evolving views on a myriad of issues surrounding the young nation, slavery being at the forefront.

While I read this as a ARC on my Kindle, I definitely think it would best be read in a physical format. Throughout the text the editors reference other entries which are similar and it is just a bit more difficult going back and forth between them. There were also tons and tons and tons of footnotes. One must also be prepared for the mental exercise needed in reading a text like this. It will take some time, as sometimes reading what those who lived 200 years ago can be consuming. To quote one of my fave movies, National Treasure, "People don't really talk that way anymore." And it's true. I must also make note of the huge undertaking it was for the authors/editors to tackle such a project. JQA left behind 51 volumes to peruse, not a project that can be done in a few weeks. And if you care to browse any of the 51 volumes for yourself, you can find them online for here.

JQA is a certainly an early politician worth getting to know better. He was deeply involved in those early decades of our nation - and how could he not have been, given the fact that his father was a Founding Father. JQA was not only a president, but he later served in the House of Representatives for Massachusetts. Time and again, he filled important roles within the government, also serving as a diplomat and Secretary of State. He literally gave his life serving his country, suffering a stroke on the House Floor after voting during a debate. Adams was a contradiction though, because while he opposed slavery later in life, he was also not keen to discuss it all that much either. He never identified with abolitionists though because he thought their demands were too extreme. So many proposals were put forth in how to handle ending slavery and what would become of all the freed men and women. Adams wrestled with this constantly, all the while worried that as the divide between the north and south grew, it would only lead to war and the potential destruction of the fledgling country.

The book is very involved. There were times I did not know if I would finish it, but it is worth the time. Definitely recommended for those who have an interest in the time period, as well as politics.
Posted by Sarah @ All The Book Blog Names Are Taken at 11:07 AM