Planet Funny: How Comedy Took Over Our Culture 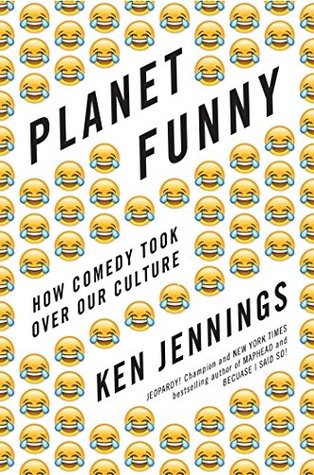 I received a digital galley free from the publisher via Edelweiss in exchange for an honest review.

I'm being generous with the 3 Stars. It's hard to take a book seriously that, at 3% in, refers to Amy Schumer as a 'feminist icon'. I considered putting the book down then and there, but continued in the hopes that would be the last of her, while simultaneously knowing it would not be. At 73% he goes a step further and says, "The success of the above-the-title funny women like Amy Schumer and Tina Fey may give the impression that comedy's gender gap is gone completely...". Not only did he keep bringing up Schumer, but he put her ahead of Tina Fey. She's not funny, and most definitely NOT funnier than Fey. Seriously.

Honestly, this book was...boring. Not exactly what you would expect about a book that talks about how comedy has 'taken over our culture'. But it was. it really was. I did find that overall, the last third or so was far more interesting. Not sure why, but it was easier to keep going, compared to the dozen times I wanted to toss it aside when I first started.

I would like to end on a positive note though. At 37% Jennings wrote, "Lorne Michaels famously hates it when Saturday Night Live cast members "break" - crack up or break character - during a sketch, but in the last few decades it's become a common occurrence on the show. Audiences always go nuts for it." This is very true, and here I leave you with my favorite, and perhaps one of the greatest breaks of all time...

Posted by Sarah @ All The Book Blog Names Are Taken at 8:44 PM