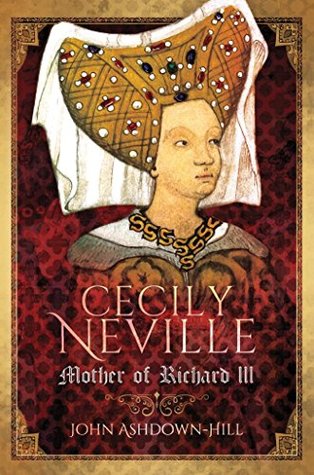 Cecily is such an interesting figure and I was so excited to be approved for this one on NetGalley. She was the mother of two kings, Edward IV and Richard III, as well the wife of a man who could have/should have been king, Richard, Duke of York. Yet we know remarkably little about her, as per usual. As with other women from this period and before, she is well-known without actually being known. For generations Cecily has been known as both Proud Cis and the Rose of Raby, yet here today we don't actually know if either moniker fits particularly well. We don't even know if she was really born at Raby Castle, or if the vanity and temper she has been identified with for so long is actually an accurate description of her character. We know the basics, that she lived in a dangerous time when the throne was changing hands between the Yorks and Lancasters at a sometimes-alarming rate. She was the grandmother of Elizabeth of York, the Princes in the Tower, and Henry VIII. What bothers me about books such as these is that sometimes so little is known about a figure, we have to do exactly what I have just done, and frame her life in relation to those around her - and those relations are 99.999999999% of the time male. Look at the subtitle even, 'Mother of Richard III'. So, I am torn on books like this. I want to know all I can about women who survived and thrived in that period, but I also want to know about them on their own terms, and not simply who they were in relation to the men in their lives.

I can appreciate the work of the late Dr Ashdown-Hill, who passed away in May of this year. I enjoy reading his work, though we do not always hold the same position, particularly where Richard III is concerned. Still, I knew going into this one that regardless of what information he presented or the conclusions he came to, that they would be well-researched and factually sound. I value his work and the fact that he chose not to focus too often on the maybes and such. There will always be supposition in books such as these, but I feel Dr Ashdown-Hill always does a rather good job of keeping that to a minimum, and giving thorough explanations for why he believes what he does. The issue with those unknowns again though, is the fact that sometimes there is simply not enough proven, factual information about someone's life to warrant a full-length biography. I feel like that happened a bit with this one. Where information on Cecily was lacking, those gaps were then filled in with information about other members of her family in that particular time. There is nothing wrong with this, and to think that one could ever write a biography about anyone without including info on those closest to her or him, is more than a bit silly. But there is also a certain point where one has to decide if there really is enough information to go into a full-length book. Sometimes, no matter how interesting the person is, the unfortunate answer is that there is not.

Even so, I would still recommend this title to anyone with an interest in Plantagenet history and this period in particular. The book is academic without being boring, and even a reader with casual interest in this branch of the family tree will find it a good read.
Posted by Sarah @ All The Book Blog Names Are Taken at 11:05 PM