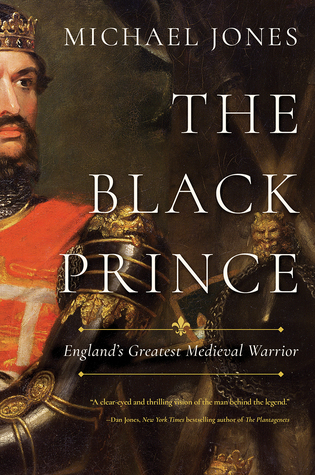 I received a free digital ARC from the publisher via Edelweiss in exchange for an honest review.

I always love a good game of "What If..." and perhaps one of the best people to include in this game is Edward of Woodstock, eldest son of Edward III, known forever to history as the Black Prince. Can you imagine how different England, and Europe (particularly France) might look even today had he lived to become king? He certainly lived up to the subtitle of Jones' book: England's Greatest Medieval Warrior, and one must only look as far as the battles he took part in during the Hundred Years' War to see the evidence plain as day.

Speaking of battles, I must say that the author does a really great job of presenting them in an interesting and engaging way. The Black Prince is one of my favorite figures from the time, which might surprise those who know my tastes well, and know how dreadfully boring I find warfare in general. Yet here is a good example of a book which I skimmed only very very minimally when it came to such battles - one of the rare occasions. I wanted to know the battle details and tactics used, because they are so telling of Edward's character and who he was as this great medieval warrior. I find the dichotomy of the Black Prince endlessly fascinating - a pious warrior. Certainly these two characteristics are opposite ends of a spectrum, no? Yet that is exactly who we find Edward of Woodstock to be. He lived in a violent age, committed violence himself on multiple occasions, and yet has been held up over the centuries as the ultimate example of "the flower of all chivalry". (Though, to be completely honest, I am even more partial to William the Marshal than I am to the Black Prince, and could make a case that Marshal was the ultimate example himself. But I digress...)

As Edward's life was dominated by warfare, that is thus what the majority of the text is about. We are first introduced to his father Edward III, who was no slouch when it came to such unpleasant things as well. But the Black Prince truly shone when he took center stage at age sixteen at the Battle of Crecy and made clear from his actions that he was indeed a warrior. In a battle where a terrible loss was expected, the Black Prince prevailed. This pattern would repeat several times in his short life (though by the standards of the day, his life was relatively long) and the outcome was almost always the same, a victory for Edward III's heir, the heir who would not live long enough to see himself crowned as Edward IV. His death at age 45 set off a chain of events that would absolutely wreck England for decades upon decades. Given that the Black Prince preceded his father Edward III in death, his son Richard would go on to be crowned Richard II at the age of ten - a child-king is always a recipe for some kind of power-grabby disaster. Had the crown been passed down the line of Edward III's sons instead of going to the oldest son of his oldest son, we would have seen John of Gaunt as John II. You know, the Duke of Lancaster. Founder of the Lancastrian branch of the family tree. Surely he would have been the better candidate than a child of ten, but the rules of the age permitted Richard's ascension to the throne. And it was not as though the Duke of Lancaster was any stranger to governing, as he had basically been doing so as the health of his father and brother faded rapidly in the end. Or going back to the whole 'Had the Black Prince lived...' thing, perhaps his own rule would have paved a much smoother way for his young son, and we might have seen Richard II become a much stronger and competent king. That in turn might have diminished the chances of John of Gaunt's son wresting the throne from him and becoming Henry IV. Though in Henry IV's defense, he really did not have much choice in the matter. Richard II had disinherited his cousin and returned all of Lancaster's land and wealth to the Crown. Henry went back to fight for what was his, and got the throne in the process. Perhaps that all could have been avoided though, if the Black Prince would have been crowned himself. Like I said, I love a good game of What If... and the possibilities are endless with this particular time period. We are talking big stuff here, such as the potential for no Wars of the Roses. No Henry IV would have meant no Lancasters vying for the throne.

I find the topic of how he came to be known as the Black Prince to be an interesting avenue to explore. There are many stories, and perhaps the truth lies somewhere in a combination of multiple ideas. One such option is his taking up the deceased Jean of Luxenbourg's (who was also blind) badge of an ostrich feather on a black background, possibly a way to honor the bravery of an opponent who died in battle? It has also been suggested for years upon years that the French bestowed the name upon their enemy for all the terrible atrocities he would commit or sanction in the Hundred Years' War - particularly at the Battle of Limoges.

It is clear from the presentation of the material that Jones has a great deal of admiration for his subject. This does not, however, mean that it is all sunshine and roses and Edward of Woodstock is not given a good hard look at who he was. I found that the author did an beautiful job in bringing the Black Prince to life, presenting both sides of his complex character - the pious prince who gave much of his wealth away to his servants, while simultaneously slaughtering opponents in battle. The Battle of Limoges is a prime example, and one of the pieces of evidence offered up by chroniclers of the time as the reason for his 'Black Prince' title. It was there, according to Froissert in his contemporary work, that over 3,000 citizens of Limoges were murdered when the city was retaken by English forces lead by none other than Edward of Woodstock. There are conflicting accounts of whether or not the slaughter even took place, but it is a key piece of evidence that again shows the complexity of the age, and of the Black Prince himself.

Over all this is an incredibly well-researched and well-crafted testament to a brilliant tactician who saw victory after victory over the French in the Hundred Years' War. He was very much a product of his age and the author does not shy away from all that implies. What we are thus given is a highly readable account of one of the great figures of the day. This is a must read for anyone interested in medieval history.
Posted by Sarah @ All The Book Blog Names Are Taken at 12:55 AM