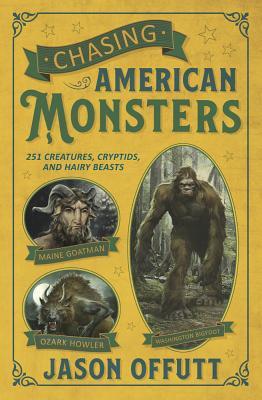 I dig the cover. A lot. It kind of has this old-fashioned vibe to it, with the goldish cover. I am a sucker for a good cover, and totally judge books by them. I can't help it.

The issue with books like this is that they are basically encyclopedias and those can get very repetitive to read. As such, this is not something you would necessarily pick up and read straight through (which is what I did). This does not make it a bad book by any means, I really loved some of these weirdo, creepy beasts that I had never heard of before. But, it does get a case of samesies when you find out that almost every state has a record of Bigfoot sightings. I won't tell you which one(s) don't though, you'll have to read and find out for yourself.

I enjoyed the author's intro as he delved a bit into the idea of monsters and why they fascinate us so - essentially, why we NEED monsters and continue to pass these legends on to subsequent generations. From there the book is divided into fifty chapters, one for each state. The state gets a brief introduction (truth be told, this isn't really necessary. I would much rather have had additional information about some of these creatures, but this could be my personal preference. I suppose it would be helpful for someone reading the book who is not from the US). Even so, there were tons of creatures I would have liked to have seen explored further, but the problem may just be that there is not enough information. Perhaps those should have been left out altogether then? I'm not sure what I would prefer. If further text was cut to make room for those shorter ones, or the repetitive ones, that would definitely be a possible change to make before the final product is published. Using Bigfoot as an example again, I feel like seeing as how nearly every state has had Bigfoot sightings, a chapter could have focused on looking at monsters common across multiple states. This would have saved some of the repetition, as I did find myself skimming over those after I hit the 50% mark.

Some of the these monsters are downright creepy, and others just plain silly. I found it particularly interesting that one of the monsters has been caught, killed, stuffed, and mounted - but I'm not going to tell you which one in that regard though, either. I really liked the sketches that accompanied each chapter; it would have been cool to have more illustrations included whenever possible.

This was a really fun look at some seriously weird creatures that may or may not exist. The author comes down on the side of believing that yes, there is something to all of these sightings. He uses Nessie as an example, that just because one time turned out to be a hoax, that doesn't mean the other hundreds or thousands of sightings are hoaxes too. Fun fact: I've been on a cruise on Loch Ness and it was absolutely beautiful. If I have not said it before (and I know I have, because I am loud and proud about it): I LOVE SCOTLAND. In fact, I love it so much, and Edinburgh especially, that I spelled my daughter's middle name Edin instead of Eden. And the only reason I thought to use Edin was because naming a child Eleanor Edinburgh was kind of mean). Here is my own personal Nessie tour, back in November of 2009: 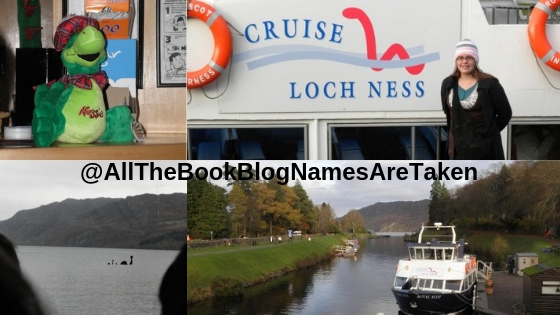 I would definitely be interested in this book for my classroom. I have a couple boys who are reluctant readers but would absolutely LOVE reading about all the beasties offered up for perusal.
Posted by Sarah @ All The Book Blog Names Are Taken at 9:27 PM