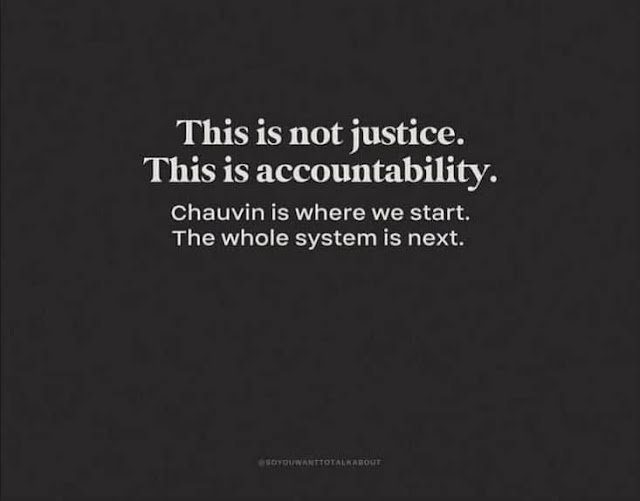 It has taken me a while to post about this, and honestly I still don't know if I have the right words. What I can tell you is that Tuesday's verdict was groundbreaking, while also heartbreaking. It does not bring George Floyd back to his family and friends, but it does give me hope that when we inevitably have to do this again (such as in the case of Daunte Wright), it will be possible for murderers to be held accountable for their actions.

I was with students all afternoon and in that 30-second slice of time between one group leaving and the next group arriving, I received a text from a friend saying the verdict was going to be read between 3:30 and 4. My last group was from 3:30-4, and 4 is when I have to be outside for bus duty. No worries though, because I was not the only teacher carrying her phone outside to try and hear the verdict. One of my good friends walked by my bus, her eyes wide, saying she could not quite hear but she thought it was guilty on all three counts. As soon as my bus was loaded, I ran over to where she was talking with another teacher. She confirmed guilty on all three counts and, I kid you not, I pretty much jumped on her and we hugged - but briefly because COVID is still a thing.

I received so many text messages confirming the verdict, it was hard to keep up. I left school to pick up Eleanor from her BFF's house and CNN was on, showing the scene outside the Hennepin County Courthouse. Had we been home (our true home IS Minnesota), you can be damn sure Eleanor and I would have been there to celebrate the fact that finally, finally, someone has been held accountable for their actions.

This does not mean the fight is over. There is still an entire system to dismantle and rebuild. But this is another first step in a long line of first steps taken since May 25th, 2020. I have faith that we can succeed and will do whatever I can in order to help bring about this change our country so desperately needs.

What will you do?

Posted by Sarah @ All The Book Blog Names Are Taken at 6:38 PM

Email ThisBlogThis!Share to TwitterShare to FacebookShare to Pinterest
Labels: BlackLivesMatter