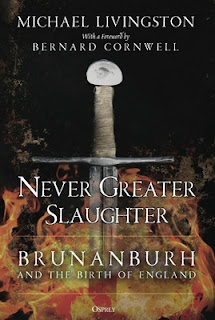 I'm not usually one for any kind of military history, but I will always make an exception for the Anglo-Saxons I love so much. Quite lucky, aren't they? Even the Plantagenets don't get that kind of treatment from me.

Part of the draw here though is that the book is so much more than the battle itself, but the archaeology behind finding out where the battle truly took place, as this information as been long lost to history.

The Battle of Brunanburh seems inevitable, once one knows the history leading up to it. The author does a fantastic job laying this history out in an easily readable way even for those with little background knowledge on the topic. He begins with the Celtic tribes who once called England home, even though they didn't call it England. Then come the Romans, then the Saxons. Slowly but surely England begins to take shape, though it will still not be called that for a couple more centuries. When we finally see Athelstan he is doing his thang, humbling kings, conquering their lands, demanding loyalty.

But this would not have been possible for him without the equally heavy lifting done by his grandfather decades earlier.

Not until my fave, Alfred the Great, came along would the stage even be set for this to happen. It was through his uniting of several of the individual kingdoms - Wessex, Mercia, East Anglia, etc. - that Athelstan could stand on his shoulders and after this terribly violent battle, truly declare himself the King of a united England.

So, why is this battle not more well-known?

After all, for generations to come, it was simply referred to as the "great battle". Everyone would know what you were talking about with this reference. Yet today, so many have no idea it ever occurred, or what its significance is.

Part of the problem is, the location of the battle is unknown, though great care has gone into locating it and the author makes an incredibly compelling case here for his theory. I do have to admit though that I have not read other books on the subject. Even so, the author spends time in the Appendix laying out why he disagrees with the theories of other historians. This is not done in a malicious kind of way, but he points out things that don't make sense with what we know, or don't fit the pattern of evidence. I appreciate how thorough he is with the material.

Once you learn about how truly massive this battle was, the logistics that must have been involved, it feels a bit overwhelming. We are talking about Athelstan and his army standing against his enemies - an alliance that would never have come together were it not for their mutual hatred of Athelstan. In fact, these allies had previously spent a good bit of time fighting one another in previous years at various times. But they figured that the only way to defeat Athelstan, to stop him from taking over every last inch of the island, was to band together. Leading the Vikings out of Dublin was their chief, the famous Analf. Coming from Scotland was King Constantine, and rounding out the trio was King Owain of Strathclyde. These men were seasoned leaders and accustomed to fierce fighting. it is no wonder they were confident that by teaming up, they could defeat Athelstan once and for all.

It might sound kind of cheesy, but just think about that for a moment. Seeing these armies come together to form one massive group, pouring from the ships that had to have carried at least two of them there. Seeing the equally massive shield-wall of Athelstan's own army ready for a fight. It's breathtaking.

Even more so when you start thinking about the possible locations this could have occurred, and can place the armies in their respective camps.

So many people are involved in seeking out this location, finding the sight of England's birth. Professional and amateur historians, linguists trying to work out all sorts of possible place-name matches, and of course archaeologists who seek whatever scraps they might find to finally be able to say, "Here, this is the place."

Not so easy to do though, when you consider that the battle took place at some point in 937 AD. The author argues for it occurring later in the year and again, given the evidence he presents, it makes sense.

The author starts where we always must in order to have a basis, and that is with research. He uses the Anglo-Saxon Chronicles and Egil's Saga, as well as the Annals of Ulster. He also makes references to other chronicles and documents as well and even if the details do not all line up 100%, they all agree on the fact that a major battle occurred in 937 AD and untold thousands died. Like any good historian, the author is aware of the biases that each of these sources carries and has to sift through to find what can be proven by other evidence. This is where those linguists come in VERY handy, breaking apart words and putting them back together, determining the meaning then vs now, and so on. I don't envy them in that job, just reading about it was enough for me.

The author determines after a good couple rounds with all the evidence that the most likely location for this all-important battle is on the Wirral Peninsula in North West England. At this time I am not inclined to disagree, though as I said before this is my first book on the subject. Even so, the passion Dr. Livingston feels for the subject, and the obvious time and thought he has poured into trying to find the site is nothing short of extraordinary. He presents his methodology for how he arrived at his conclusions regarding troop movements, likely encampments, the battle itself, and its aftermath.

My only complaint with the book has to do with formatting, something out of the author's control. Not one single numerical value was present, which sometimes made it difficult to assess parts of the author's argument. Every value, from troop numbers to the years being discussed, was represented with a ? and it was SUUUUUPER annoying.

Otherwise, this was one I enjoyed quite a bit. I have been lucky so far in that I can never really go wrong with a book about Anglo-Saxons. It is my favorite period of England's history and even after devouring so many books on the subject, I am still learning new things.

Posted by Sarah @ All The Book Blog Names Are Taken at 8:01 PM