Publicist Gift | The Greatest Hoax on Earth: Catching Truth, While We Can 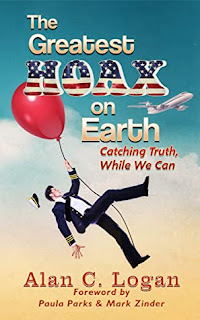 I received a free physical copy of this book from Emily Keough (publicist) in exchange for an honest review.

Just to get this out of the way, the cover is weird and I don't like it.

I know Abagnale's "story" - his version anyway - for the most part, though I might be the only person left on the planet who has not actually seen the movie (surprising, considering the fact that we are talking about Leonardo DiCaprio and Tom Hanks here, my two fave actors of all time). Honestly, the story just did not interest much, though I think I have Abagnale's book on my Kindle, possibly.

This story, however, the story about the story, is HIGHLY addicting.

Here the author has pieced together what ACTUALLY happened in all the years Abagnale was supposedly such a charming con man who never hurt a single person, so he claimed. He's given a voice to those who were hurt, who suffered financially at the hands of a guy who likes to say he is the greatest con man the world has ever seen. Turns out, he's not. What he is though, is a big fat liar. About EVERYTHING.

For decades Abagnale has been leading this life in which he claims to have been a doctor, an attorney, and pilot, and more. He makes his living now by giving lectures and basically explaining to companies how to not get duped by guys like him. Except that in itself is all a con, because almost certainly most of it did not happen the way he claimed. There are likely bits of truth here and there, and the book still leaves some questions unanswered, but overall it is a big fat nope on the truth scale.

One of the most important points I took away from this book is that these were not the victimless crimes that Abagnale has always claimed. He has maintained that he never stole from small companies or individuals, and that he has paid everyone back. Yet this is proven false in multiple instances when the author uncovers victim after victim, people who trusted Abagnale.

The Parks family in particular is key to unraveling the truth and separating fact from fiction. Paula Parks was a lifhgt attendant for Delta in 1969 when she met Abagnale basically because he stalked her, claiming to be a pilot. He charmed his way into her life and the lives of her family members, moving in with her parents and sleeping in her old room. Outward appearances showed him spoiling her parents constantly with gifts and dinners - all paid for by the money he was stealing from them. Mark Zinder is another key figure in tearing away the curtain. He was Abagnale's booking agent in the 70s and 80s, and had a front row seat to many of the shenanigans - and had plenty of stories to share on Abagnale's darker side.

The author makes fantastic use of all kinds of records - proof that Abagnale's cons are what the actual con is here. Court records show that he could not have done some the things he claimed, because he was already in jail for far less glamorous charges. That alone is all the proof I need to see through the bullshit. There's more, however. So much more.

More written records in the form of multiple exposes written at the time are discussed and those are just as damning. Many journalists were skeptical of Abagnale's claims then, and did plenty of investigating of their own to expose his lies. Yet for some reason, their findings failed to gain traction and Abagnale only rose higher and higher. The obvious cause for this is the way information was disseminated at the time. Long before the Internet became a thing, Abagnale was free to peddle his nonsense and his wider audience was none the wiser. This part is the most frustrating for me. He's on Johnny Carson how many times, and no one from the show looked through newspaper accounts from across the country? The journalists who wrote the stories pushed to make their work known, but it seems like people would rather have believed Abagnale and his complete fabrications.

The most frustrating thing now though, is the fact that people STILL believe his stories. Nearly all of his claims have been disproven and here we are, still at a place where many who have read the book and/or seen the movie believe what he is selling. It is beyond absurd.

I found the sections that delved in Abagnale's family to be of high interest. His parents divorced and he ran off. He was arrested for a slew of petty crimes in NYC on many occasions and was almost always placed back into the custody of his parents. It is especially telling that his parents believed him to be mentally ill. They believed he needed psychiatric help to confront the causes of his compulsion to forge checks and steal credit cards. If that had ever happened, perhaps none of Abagnale's victims would have ever crossed paths.

What I don't understand is how this has gone on for so long. Abagnale is still a security consultant and makes his living pushing this story that has been shown time and again to be false. Yet, he has never been charged for any crimes in this deception. How is this possible? He has claimed to have worked for the FBI as a consultant because he was just so fantastic at forging checks. This has been proven false. Yet Abagnale has not been arrested or charged with the crime of impersonating a government employee. That's kind of a big deal, something like three to five years in prison if found guilty? And it's not like the FBI doesn't know who he is or what he's doing still, to this day. Every FBI agent contacted about this say they never knew or worked with him. Abagnale claims that everyone denies knowing him because they are all so embarrassed to have been duped by him as a teenager. Why has the FBI never come out and formally said this is not true? Why have none of the places he has claimed to have worked (hospitals, airlines, city governments) not come out and announced that it is all lies? And what about the companies who pay him for his supposed security expertise? I would be demanding my money back and taking him to court over it.

Those questions are ultimately left unanswered and the only reason I rated the book four stars instead of five. This still makes for a compelling read that I highly, highly recommend - regardless of your familiarity with the supposed exploits.