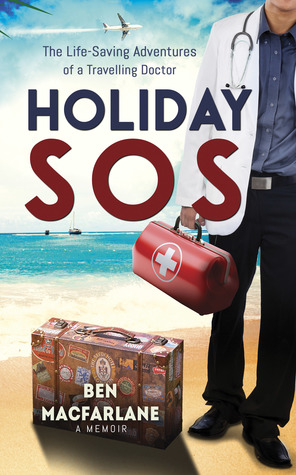 I had no idea this was even a job. I mean, I suppose had I given it any thought, I would have realized this kind of practice had to exist, but since I've never thought about it, it never occurred to me what might happen to someone who has a terrible accident or becomes deathly ill while on vacation. I now also know that, despite the perks of travelling around the world, it is a job I could never in a million years do myself. So, thank goodness there are doctors like Ben MacFarlane who are more than willing to.

I really found so many of Dr MacFarlane's patients fascinating. Some of the stories were hilarious, some were terrifying, and some were heartbreaking. As Ben is traveling back and forth, repatriating British citizens who are injured while on vacation outside the UK, we also get an understanding of the job, and a peek into his personal life as well. I felt like that was important too, so we got a glimpse of who he is as a person, not just this robotic doctor who flies in and out of the UK constantly, escorting injured travelers for the insurance companies. He seems to truly care about the patients he is escorting, and more than once having to save mid-flight. I found the way the stories were explained to be respectful to all of those most deserving of it (don't even get me started on that extra rude lady).

There was one point in the book where I teared up. Ben was escorting a sweet elderly lady back to the UK. She'd been traveling alone, and upon arrival, there was no one to meet her or stay with her at the hospital. Ben later found out that Mrs. Dean passed away two days after arriving back in England. No one was there for her funeral either. Just typing this gets me choked up, and I appreciated Ben's sentiment that he would have gone, had he known.

I appreciated the fact that this did not read like a medical textbook full of jargon that no one understands besides the doctors and nurses who might read this. It was not watered-down, but explained in a way that made sense, without being condescending. In a high-stress job like this, not only would a doctor or nurse have to be highly skilled at what they do (comes in handy when your charge suddenly takes a turn for the worst when you in the air), but must also be able to be a calming presence, able to be empathetic and comforting, to the patient who is injured and/or sick, scared, and a long way from home. Such a difficult job and, as I mentioned before, one I know unequivocally that I could not do myself. Ben has a tough job to do and not always a lot of time to do it. He gets a patient, studies the case, heads out, then has to deal with the doctors at his destination (some good, others difficult). At that point he then has to assess the patient to see if he or she is even fit to travel. Sometimes that is an immediate yes, sometimes they have to wait a few days, and sometimes the wrong decision is made. Through it all, Ben remains calm and collected, and delivers each patient here back home safely to a hospital in the UK for further evaluation and testing if necessary. Ben does not accompany patients on that leg of their journey. Once the plane has landed and he has delivered him or her to the waiting ambulance, he is off on his next adventure - whether that be traveling to an exotic location, or sleeping at home for the first time in a week.

I've never given a single solitary thought to purchasing travel insurance, but given the multitude of stories presented here, that is something I will most definitely be thinking about in the future.

As I read, time and again I thought about what a great television series this would be. It is certainly unlike all the other medical shows we see - at least, I think so. Truth be told, I got rid of cable seven years ago and haven't looked back. I don't even bother with local channels much, but this would be a show I might watch. Obviously these cases did not all happen back to back to back, but were presented as some of Ben's most dramatic/dangerous/obnoxious/etc stories. Just imagine, all season long there are these really difficult cases, the doctor almost loses a patient mid-flight on a few occasions, all kinds of good, heart-pounding drama. Then the season finale, literally everything goes as perfectly as it can, it's a totally relaxed episode, drama-free, and everyone makes it home alive. People would be so confused, it would be great.
Posted by Sarah @ All The Book Blog Names Are Taken at 10:01 PM

Email ThisBlogThis!Share to TwitterShare to FacebookShare to Pinterest
Labels: Around the World, Gifts From Authors/Publishers, Kindle Guilt, Memoir