I have posted a time or two or twelve about a fantastic museum we have here in Omaha. The Durham Museum is housed in the former Union Station (bonus for me, I cam OBSESSED with old train stations) and is an affiliate of the Smithsonian. Year after year I am amazed by the awe-inspiring exhibits that grace its halls.

The most recent exhibit to open is one Eleanor and I have been not-so-patiently waiting for, James Cameron Challenging the Deep. Let me tell you...wow. Just wow. If you don't live in Omaha (this is mostly a good thing, Omaha sucks), then make sure you can see the exhibit on one of its future stops. It is hands-down one of the best the Durham has ever had - and that's saying a lot, considering everything that has come through in the last seven years.

For a brief recap, Eleanor's first visit to the Durham came when she was one month old. My mom and grandparents had come to visit and I was excited to see the latest exhibit featuring Sue the t Rex. I'd seen Sue in her home at the Field Museum in Chicago, but could not pass up the chance to see her again. It did not disappoint, but I did not figure to be back much in Eleanor's younger years, as this is not exactly a museum for children.

Don't get me wrong, there is PLENTY for children to enjoy. There is a massive interactive model train set, as well as train cars for guests to explore. Many sections of the permanent collection are also unique. Not to mention, many of the travelling exhibits have some component that will be interesting to kids - whether designed that way, or by sections/pieces added from the Durham's own collection. I just did not foresee that happening with my almost-three-year-old when we next visited the Durham to see one of Shakespeare's surviving First Folios. Of course I stood there over the glass case, blubbering like a baby as I read Hamlet's soliloquy and museum volunteers asked if I was alright.

After exploring the rest of the artifacts on display, Eleanor was eager to get out of her stroller and clamber aboard the train cars and trolleys. This kid was HOOKED. One a MUSUEM. And she wasn't even THREE YET. We would visit several times in the next couple months alone, even having her third birthday there, as well as her three-year pictures.

By this point, the majority of the staff knows my daughter and I well. We've done summer camps, Christmas Tree lightings and Santa/reindeer visits, cultural festivals, and Flappers and Fizz events (Eleanor is really upset she's not allowed at these, on account of the alcohol. She gets reeeeeeal upset whenever I go to the Durham without her, which is rare), Halloween shindigs, summer story times and activities, and more. This is all in addition to regular visits. During the summer we are there easily two-three times a week. Time and again staff members have gone above and beyond for my girl and I love them all so much.

So, with this new exhibit opening, you can imagine we were pretty psyched. Though it would be showcasing artifacts related to numerous underwater explorations by James Cameron, we were of course most interested in anything Titanic-related.

Our friend Abby, who works at the Durham and is the Director of Education Services, has also been pretty pumped for the opening and I was so ready to see it after hearing her talk about it. She said it might be one of her favorite exhibits ever, which you can imagine might make it quite good, considering the plethora of others that have some through.

We'd been chatting about it on Thursday, May 20th and I was lamenting the fact that the sneak-peek member-only days always happen on Fridays. We almost never get to attend because Eleanor and I are both at school. Abby told me that due to unforeseen pandemic-related shipping delays, some of the pieces had not actually arrived until that very week, so the members-only day had been cancelled and the official opening for everyone would be Saturday the 22nd.

I knew long before this conversation that Eleanor would be visiting, but hearing Abby talk about how great it looked and how captivating it was, I registered for tickets that night. Plus, facemasks were still required for guests at that time (not until the following week would the mandate expire), so obviously Opening Day was our best choice.

Once she heard that, Abby decided she would go too, even though it was her day off and she did not actually have to be there. It's not often she gets to wander through the museum with us as a patron because she is always working and someone is always calling for her on the walkie. But this would be perfect! I felt marginally guilty because it WAS her day off after all, but...Titanic. We made a plan to meet at the museum a little before ten when they open.

But the story gets even better!

Friday night Abby texts me and starts off with something to the effect of, "I have a super cool secret thing that will be awesome for Saturday for Eleanor and I don't know if I should tell you or let you be surprised too!"

Of course I HAD to know. If it was something big, I wanted to be able to record Eleanor's reaction, because that's what parents do these days, right? Plus, if it was by chance Titanic-related...

Anyway, so Abby tells me that she's been working with a woman named Kim from the Avatar Alliance Foundation, who were partners in creating Challenging the Deep with the Australian National Maritime Museum. Abby had talked to Kim that Friday afternoon about Eleanor and I being Durham Super Fans, and Abby even showed Kim this photo of Eleanor taken the previous summer. We'd stopped at the Durham to pick up supplies from Abby for summer camps that would be held via Zoom for 2020 and Eleanor was clearly upset that she was so close...yet so far away from her favorite place in the entire world. 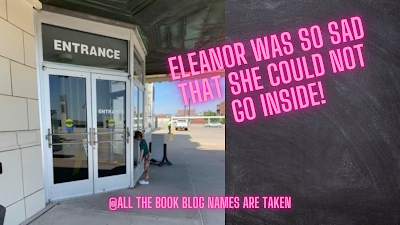 Abby also told Kim that we would be seeing the exhibit that next day, and would hopefully be the first ones in. At that time I did not realize, or it had escaped my memory, that the Durham was the very first stop on the tour and this was the North American Premier. Kim asked Abby to do her a favor and record Eleanor's reaction going in, because SHE WOULD LOVE TO SHARE THE VIDEO WITH HER GOOD FRIEND JAMES CAMERON so he could see who the very first visitor would be. Kim said that Mr. Cameron supports and encourages young scientists and especially young girls so they are represented in the field.

It was super hard to keep that a secret from Eleanor. I've let her watch Titanic (obviously some scenes were heavily censored, including the span of 45 minutes where everyone dies) so she knows who James Cameron is. We've also talked a lot about Dr. Robert Ballard (who is doing a virtual lecture for the Durham on June 10th and you can register HERE) and how he discovered where Titanic sank. Eleanor is pretty well-versed in her knowledge of Titanic-related people.

So, I had this big secret to keep all night and we got up bright and early to meet Abby at like 9:40, because we were determined to be first. 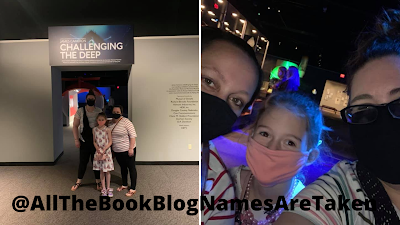 As soon as we reached the entry to the exhibit hall we both started recording and Eleanor was entranced immediately. There was so much to see, she could hardly focus on one thing at a time. I even felt overwhelmed, but it a completely amazing way because there is just SO MUCH. It truly is an immersive experience. We recorded for about five minutes, then Abby finally told Eleanor WHY we were recording her. Eleanor promptly shrieked and ran away. Then she recovered and told James Cameron hello and how happy she was.

There are four large screens running various short videos on timed intervals - From the Abyss, Titanic, the USS Bismarck, and DEEPSEA CHALLENGER. Eleanor ran to the DeepSea Challenger video immediately and recognized Cameron. She stood watching for a couple minutes, just trying to take it all in. Then I pointed her toward the Titanic artifacts and video. She recognized Jack's outfit right away, and the dress Rose was wearing in the scenes from the night Titanic sank. We saw props from the movie including the Heart of the Ocean necklace and Rose's butterfly comb and mirror that were retrieved from her state room. AND...the last existing copy of Titanic's script, complete with Cameron's notes scribbled all over it. 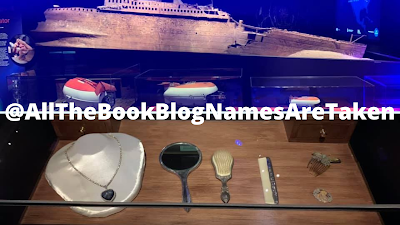 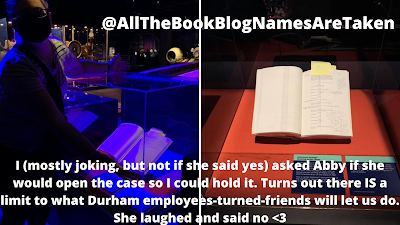 There was so much more though, SO MUCH. I had no idea just how deeply and passionately James Cameron loves the ocean. There were artifacts from his childhood that his mother had saved, drawings and models he'd created over the years.

We saw deep sea specimens brought up from the darkest depths of the ocean, as well as a wide variety of submersibles used on many of his missions. There is also a replica of the pilot sphere that Cameron co-designed and engineered himself that guests can sit in. This is the vessel he used on his solo dive to Challenger Deep, the lowest known point on earth, in the Mariana Trench. 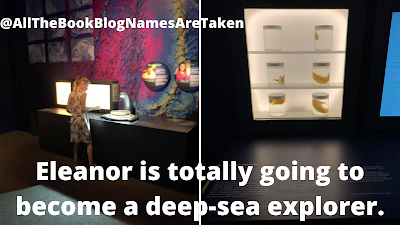 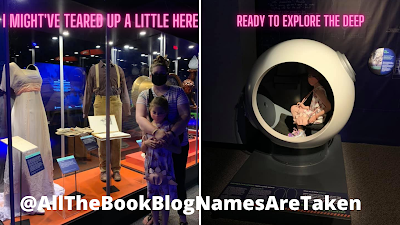 There's just so much here, I could go on and on and on. We are actually going back tomorrow so my aunt, who is in town visiting, can see our favorite place. Then my mom is coming this weekend for Eleanor's dance showcase and guess where we are going on Sunday? I'll give ya three, but you'll only need one.

If this exhibit is coming anywhere near you on its tour, you must go see it. It will take your breath away.

And of course Eleanor and I could not leave without a few treasures of our own. Yes, yes we did both get Heart of the Ocean necklaces. 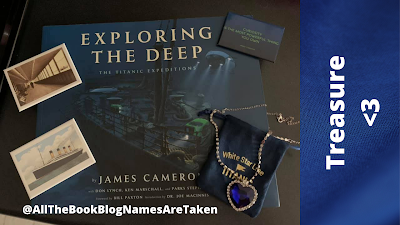 Posted by Sarah @ All The Book Blog Names Are Taken at 9:50 PM

Email ThisBlogThis!Share to TwitterShare to FacebookShare to Pinterest
Labels: Shipwrecks NOT Involving Titanic, The Durham, Titanic