NetGalley ARC | The Deviant's War: The Homosexual vs. the United States of America 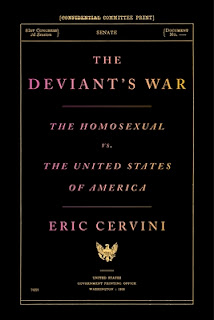 This one took me much longer to read than I care to admit, but I am not sure why. it is exactly the kind of history I would want to read, history that is nearly lost to us, because it occurred a generation before Stonewall. It very well could simply have been the time frame in which I was reading it - a lot happened last year, to say the least.

Prior to reading this, I had no idea who Frank Kameny was. I am so glad I stuck with it, because it is one of the best books I read last year, despite it taking me a while to get through.

Highly gifted and evident from a young age when he taught himself to read at four, Kameny's path should have been easy. By age six he knew he wanted to be an astronaut. Yet life would get incredibly painful and complicated for him in 1957, just twelve short years after fighting for our country in WWII. It was in that year Kameny was called to Washington where he was to meet with officials who had reason to believe he was a homosexual - the kiss of death for one's career when security clearance is required.

After a series of insanely humiliating interviews, Kameny was relieved of his duties in Hawaii. He was not the first to be fired for being gay, nor was he the last. What makes Kameny stand out though, is that he fought back - taking on the US government.

Kameny became an early leader in the fight for gay liberation, when those words did not yet even go together. Kameny refused to be silent and simply accept his dismissal. He began putting together the arguments that formed the basis of the broader movement that we know today.

Kameny is not without flaws and I find it refreshing that those were laid out in detail, just as the rest of his story was. A particular point of interest I want to touch on is the idea Kameny had in his head of respectability. He insisted on a very strict dress code at the protests he organized; he wanted to ensure that gay and lesbian protestors looked "employable". Even from the outside looking in, Kameny felt it was important to look the part instead of as an 'Other' that would potentially hurt the cause and there were extremely rigid guidelines he expected fellow picketers to follow. I find this to be an important mention because I feel like today people who are removed from the LGBTQIA+ community do not recognize the fact that there is conservatism there, just as we see in so many other aspects of society. Kameny wanted fellow protestors to remain what the time Period considered respectable. I think this is a thought that takes some getting used-to, considering how perspectives have changed so drastically over the decades in some ways, and in others not at all.

Kameny would spend much of the rest of his life dedicated to fighting for the rights of homosexuals specifically, though this broadened as the years went on. He founded the DC branch of the Mattachine Society - good Lord, the in-fighting sometimes! It grew incredibly frustrating to read, but Kameny never lost sight of the goal even through all of it. Gay and lesbian people deserved the same right as everyone else and he would not rest until he had done all he could to make it so.

There is so much information here, the author has meticulously researched his main subject and then placed him in the proper context of his time. The sheer amount of material he worked with is jaw-dropping, something like over 40,000+ documents which he weeded through in order to tell this story. It is an important one and needed to be told.

Posted by Sarah @ All The Book Blog Names Are Taken at 6:46 PM