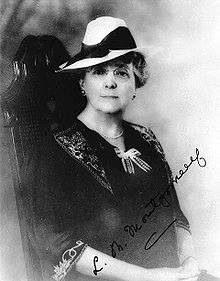 Who would have guessed there would be two spotlights, two days in a row? Me, if I would have given a second thought to it! While yesterday was Louisa May Alcott's 184th birthday, today is another special day, as it the birthday of ANOTHER childhood favorite: Lucy Maud Montgomery.

Anne with an 'e' is one of my all-time favorite character and I have spoken of my love for the entire Anne of Green Gables series in various posts, especially the Top ten Tuesdays where she is applicable. I won't rehash those statements, but I do adore Anne and wanted to live on Prince Edward Island with my BFF Diana Barry.

L.M. Montgomery was born on November 30th, 1874. In her lifetime, until her death on April 24th, 1942, Montgomery published 20 novels, as well as hundreds of short stories, poems, and essays. If you are only familiar with Anne and her series, I certainly recommend some of her other novels as well. Most of her writings were set in PEI and put the province on the map as a popular tourist destination. I am excited to visit with my daughter one day when she is old enough to read these books - I just hope she loves them as much as I do.

Her mother passed away when Montomery was just shy of two years old, and so her father sent her to live with her grandparents. Montgomery had commented on how lonely she was growing up, and it was in this time that she developed a creativity that would benefit her later as a writer. Later, she attended Prince of Wales College in Charlottetown, where she earned her teaching license. She then went on to study literature at Dalhousie University.

Anne of Green Gables was published in 1908 and was instantly a hit, A couple years later she married Ewen Macdonald. They had three sons, though their second was stillborn. Throughout her adult life, Montgomery struggled with depression, and considered writing to be her source of comfort in her "mostly unhappy" life.

An interesting fact I recently learned is that Montgomery had completed a ninth Anne book in the year leading up to her death. This was a collection of short stories that had been published previously, but that Montgomery had edited and revised to include Anne and her family. There were also poems, which were "written" by Anne and Walter (even as I write his name as an adult, my heart jumps in my throat and I tear-up thinking of him, as he was killed in World War I. These characters became so real to me). However, the book was not published at the time and one possibility is because of the strong anti-war message in one of Anne's passages. In October of 2009, the volume was finally published in its entirety; it had previously been published under the name 'The Road to Yesterday', with many pieces of the original work removed. You can find it today under its original title, "The Blythes are Quoted". I will definitely look for this one ASAP.

There are several biographies to choose from if you are so inclined to learn more about the life of L.M. Montgomery. I can not recommend the Anne series enough; Green Gables was easily the most important book in my life prior to discovering To Kill a Mockingbird in 6th grade.

Have you read the entire series, or only Green Gables? What about the Emily books, or Pat? Leave a comment and let me know what you think!

(photo and some information from https://en.wikipedia.org/wiki/Lucy_Maud_Montgomery)
Posted by Sarah @ All The Book Blog Names Are Taken at 10:16 PM