The Twible: All the Chapters of the Bible in 140 Characters or Less

Apologies! For some reason this post has changed itself permanently to the smallest type-setting and no matter how many times I try to edit/resave, etc, it will not change back to normal. Even so, it is a fantastic book and I highly recommend it! 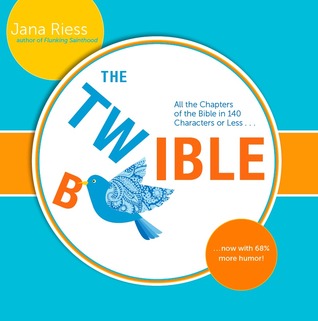 Firstly, I definitely have to get a copy of this for myself. I had my Bible (shout out to King James!) with me for much as I was reading, but then I would get so caught up in Riess' own summaries that I would be laughing all the way through the Old Testament (God will forgive me, right?) But I need my own copy of this one because I found myself wanting to highlight and add my own little notes as I was going. Since this belongs to my wonderful pastors, I figured marking up their copy was probably not a good idea. On the other hand, they are friends with the author so they could probably get a new one pretty easily...

Just kidding, I'll get my own.

In all seriousness, I actually think this is a pretty engaging and humorous way to bring the Bible to those who might shy away from attempting to read it because let's face it, those begats will get ya. I know I am definitely more motivated to start reading the Bible in a more thorough way again, not just jumping around in the New Testament. Maybe not cover to cover, because I don't necessarily feel like the Old Testament especially needs to be read that way - it is not even told in chronological order itself.

Secondly, this book has a lot to offer besides cheeky and sarcastic Tweets of Bible chapters. There are numerous tidbits that really add to the experience as a whole. Each book of the Bible is summarized at the start of its own section, before each summary then of each chapter within that book. There are also a lot of additional sidebars related to specific portions of the text that give further insight/information on events or groups. I found those especially helpful when some Tweets left me thinking, 'wtf?' You'll also find some illustrations throughout, as well as as a section at the end dedicated to clarifying who is who in the Tweets if you were unfamiliar with the abbreviations used. Big surprise, one of my favorites parts was the section entitled "Notes: Or, Where to Find What All the Smart People Said". Here the author includes the numerous other authors she mentioned throughout the book when giving her own commentary. As you can imagine, I have added several more books to me TBR as a result. Thanks, Jana! (This is not sarcastic. I genuinely mean it.)

(Okay, it is a little sarcastic only because my TBR list is nearing 4,000. But I will read all those books, Father Time be damned. Mostly not sarcastic though, because I do love to read.)

Thirdly, the remainder of this review will be some of my most favorite Tweets (or quotes). If you want to see all the ones I made notes of, you can check those out on Goodreads. I am really going to try to include only the best of the best of the best, but early in Genesis I was already wanting to quote almost all of them so...

If these don't convince you to pick up The Twible, nothing will. Even if you are leery of the actual Bible, for whatever reason, I really do think you will enjoy this one. Just a note, I'll list the page number if it is from a sidebar that I am quoting. If it is the Tweet, I will list the Book and Chapter, no page number.

So, here you go. You're welcome.

Genesis 14: Phar pursues Israel across the Red Sea while monologuing. Then G drowns Egyptians, because not enough people have died yet in Exodus.

I Samuel 4: Israel routed by Philistines! Ark captured! (That's like when someone steals your college mascot, except that folks also tend to die.)

1 Chronicles 11: In this utopian history, Jerusalem falls without a struggle, all 12 Tribes instantly unite behind King David, and unicorns are real.

Page 89: In sum, the moral of Chronicles is that the sun shines out of David's butt. Not that we've ever seen his butt, because he never, ever danced naked before God and everybody.

Page 128: It's worth noting that even though Jesus was not actually abandoned by God, he felt that way at the time, and the words he chose to express that isolation were ones that had been consecrated by centuries of prayer.

(Though this quote is not particularly funny at all, I wanted to include it here when in Psalms, because the author makes a fantastic point in regards to this book and people asking why bad things happened to good people and where is God in those times?)

Isaiah 29: G: because you pay me lip-service while your hearts are far from me, I'll give your Wii to the Syrians and put you in a long time out.

Malachi 4: The OT ends, ushering in 400 years of silence because G is busy having brain surgery to change his violent personality for the NT

Mark 3: A house divided against itself cannot stand. Say, for example, one person roots for Michigan and another for Ohio State. Hypothetically.

(This one is really tough for me because this afternoon Michigan lost to that school down south in double overtime. Ugh.)

The last bit I will touch on is a sidebar on 266-267. It's not actually just a sidebar since it takes up the entirety of two whole pages, but it is important. There is a great explanation here of Paul and "Paul", as the authors refer to them as. She breaks down all the letters that have been attributed to Paul, with some convincing, albeit brief, arguments (and then gives a further reading in the Notes section later). Here the letters of Paul are divided into four categories: those we know for sure were written by Paul, ones possibly written by him, probably not written by him, and definitely not written by him. Of all the books listed in the Notes section, this is one of the ones I am most interested in getting my hands on first.

The whole book is full of gems like the ones I mentioned above, and I read the entire book within a 24 hour period. There's even a quote from Hemant Mehta (the Friendly Athiest) on the back cover: "I wouldn't object if Twibles were in every hotel room."

Can you really argue with that? Highly recommended.
Posted by Sarah @ All The Book Blog Names Are Taken at 10:35 PM