Aleppo: The Rise and Fall of Syria's Great Merchant City 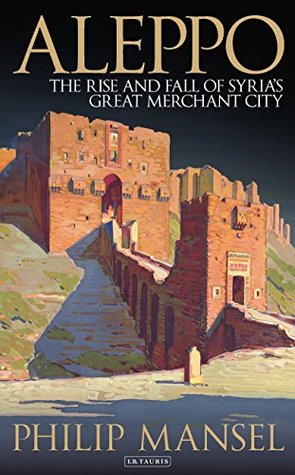 I received this digital ARC via NetGalley from I.B. Tauris in exchange for an honest review.

I am forever fascinated by this region of the world and the splendor of old cities like Aleppo, Constantinople, etc. These cities managed to mix East and West and thrive for centuries. Unfortunately, nothing good can last and the latest civil war has all but destroyed one of the grandest old cities in the world.

My major complaint about this text is that it starts in the 1500s and I would have loved to read more about its existence before that. While we still get a vivid pictures of the city from that time up to now, there's so much more that could have been explored. This is an especially important point for me to make I feel, as only the first shorter portion was the history of the city as written by the author. The remaining bulk of the book was filled with eyewitness accounts of the city from different men and women who traveled there throughout the centuries, again from the 1500s, on. I feel like this was a missed opportunity, as there is so much more that could have been addressed. However, I must say that those eyewitness are invaluable. These accounts are incredibly thorough and paint a lively picture of a once-bustling city that no longer exists. This is a tragedy.

At one time Aleppo was one of the greatest cities in the world. Christians, Muslims, and Jews co-existed in relative peace. Despite different religions, traditions, and cultures, the city boomed. Even with the city changing rulers over the centuries, from Romans, Persians and Greeks to the Ottoman and French. It was under the rule of the Ottoman Empire that Aleppo found its place as one of the cosmopolitan cities of the world, where world-wide trade allowed it to flourish. Merchants came from all over to trade, and some ended up staying. In this first section we see Aleppo as a powerful city, even up until about ten years ago when the population was over two million inhabitants. Now, with the war have devastated the old city, the population is fewer than 500,000. It is such a shame that so much history has been lost and I truly hope that the city can recover and become what it once was.


The notes section is satisfactory, starting at 86% and ending at 92%. From there the bibliography went up to 96%

The lack of attention given to Aleppo prior to the 16th century is what really sunk this one to three stars for me. It seems like such a missed opportunity to have portrayed the city in all its glory, as one of the longest continually inhabited cities in history. I'm still interested in the subject and will seek out other texts on Aleppo.
Posted by Sarah @ All The Book Blog Names Are Taken at 11:40 AM