Beyond the Northlands: Viking Voyages and the Old Norse Sagas 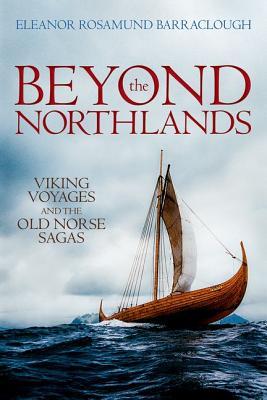 I received a free copy of this digital ARC via NetGalley from Oxford University Press in exchange for an honest review.

I am way late to the party on this one, having received it in October of 2016. I got sidetracked by my own writing projects, but there's really no excuse. Nonetheless, I am so incredibly glad I finally got around to this one because it was, in short, fantastic. This review may be on the sparse side, as once I started reading I could hardly put the book down and as such, I only stopped maybe twice to make notes of items I wanted to include in my review.

I never realized how much I did not know about the Vikings, or Norsemen, or whatever other catch-all term can be used to describe the explorers, raiders, looters, etc. Perhaps because of my own singular focus on the history of the UK, and I never gave it much thought that they would travel to other lands as well, eventually assimilating much as they did in England as well.

I was unsure what to expect in terms of how much the book would simply be a translation of the Sagas. While I find them interesting, I am no really wanting to read them as a whole. I enjoy snippets, but I also like my history concrete and factual. The Sagas containing the other-worldly beings are not of much interest, despite my fascination with the Norse travelers. What I appreciated then, is that the author used both sets of information, the history that we do know, as well as how the Sagas portrayed events and travels. Often, weird creatures aside, the information lines up rather well, which was really cool to see. Kind of amazing too, considering that so many of the Sagas were written long after the fact. We get tons of background information in this text and it all meshes together so well, painting as complete a portrait as possible of the Norse warriors/travelers/etc. Seriously, I do not really even know what to call them. Excuse my laziness, but from here on out I will simply refer to them as Norsemen, despite the fact that it is not entirely accurate and also because there were of course Norse women too.

The only real issue I had with the book comes from it being in digital format and thus is not something the author had any control over. This is definitely a book meant to be read with a physical copy, as most of the maps were chopped up across three "pages" on my Kindle. This may also have just been a formatting error within the ARC itself, and could have been remedied in the final copy. Still, I'd like to see them in color as well, along with the photos included. I will likely seek out a physical copy in the future to get a better look.

Perhaps the most eye-opening thing about this book to me is the realization that the Norse travelers went nearly everywhere. Not just to England and across the expanse of northern Europe into Rus, or Russia as we now know it as, but to Byzantium. These dudes went all the way to Constantinople! And not always as rapey, pillagey hordes, but again, assimilating into the culture and society and becoming the Varangian Guard and fighting as mercenaries for the emperor. Even Harald Hardrada, my favorite berserker, makes a substantial appearance as one of the Guard, long before he becomes King of Norway and then sets out on the ill-fated journey that would see him meet death at Stamford Bridge.

Speaking of 1066, I absolutely loved this bit of information when I came across it at 57%, speaking of Queen Isabella of France, wife of King Edward II of England:

I've always been partial to Harold and while it was not really a comfort to him, being defeated in battle and all, his descendants would go on to sit on throne of England after all. I love finding out random tidbits like this. After all, most royal houses all over Europe are still related today.

I found the structure of the book appealing, as it greatly aided in the understanding of the various Norse and the reasons for their expeditions beyond the fjords. In each direction, as the book is broken up into North, South, East, and West, we are given historical background information of the culture of the Norse, as well as the geography, history, and even current archaeology of the lands they traveled to a millennium ago. As always, the author then goes back to the Sagas, weaving it all together. I was particularly interested in Greenland and Vinland, as well as the archaeological finds still being discovered. I would love to visit Greenland and see these places for myself at some point in the future, what a sight that would be. I also found myself becoming more interested in that of the Rus, as well as the idea of the Norse in Constantinople, Jerusalem, and even Africa. I do not know why my brain is having such a difficult time wrapping itself around the latter group, but I am hoping there is more material out there that I can follow up with.

In this ARC, the text itself ended at 84%, with the following 15% being given over to substantial end notes, in addition to the dearth of information found within the text in footnotes. At 99% the author offers up information about the full texts of many of the Sagas and complete translations. She makes note that the translations used in this book are her own, and may vary a bit from the same Sagas translated by others.

This is a great resource for those wanting to learn more about the Norse and their widespread travels. It is well-researched without being so overly academic that you feel like you are being talked down-to. Highly recommended.
Posted by Sarah @ All The Book Blog Names Are Taken at 3:37 PM