Publisher Gift | Our Story: Coming Out in the Time of HIV and AIDS 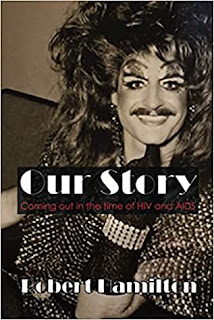 I received a physical copy free from the publisher in exchange for an honest review.

This is an incredibly powerful memoir of coming of age and finding oneself in the late 70s, just a few years before the terror of the AIDS-crisis would unleash itself onto an unsuspecting populous. I will say straight away that the reason for my rating has more to do with editing than anything else and I feel like one more round with an editor and this is easily a solid four-five star read. The story is told in a diary format, which I sometimes struggled with because the narrative could be choppy in places.

The author takes us on a journey through his life story from young adulthood and on.  Hamilton leaves his hometown in New Brunswick in 1977. With not much going for the paper mill town, he has little choice, really, if he wants to see all that life has to offer. At that point in his life he was not out, though that did not stop some family members from talking and I feel such heartache for young women and men who still go through this experience today. Hamilton spends two years in Toronto, then moves on to Edmonton , still a bit naïve about the world as a whole and the world he is about to become part of.

As Hamilton begins testing the waters and somewhat hesitantly comes out while living in Toronto. He finds his best friend in Joe, a drag queen who rules the night. The friendship is not without its difficulties but it proves to be a lasting one, as they become roommates and eventually move to Vancouver. This occurs in the summer of '82, and they believe they have their whole lives ahead of them, nothing but good times and good friends on the horizon.

Soon reality comes crashing in as a mysterious and terrifying illness starts making its way through their large and extended group of friends, just as it did to so many around the world. Suddenly the AIDS crisis is in motion and no one is immune. With so little information but plenty of homophobia, young men in particular die at alarming rates. In hospital rooms the doctors and nurses are too afraid to enter, these young men often spent their final moments alone.

Hamilton writes of all of this with brutal honesty, never shying away from the difficult parts. His focus specifically is on living life with his best friend, from those days before Joe tested positive for HIV, right up to his death and the aftermath. It isn't always pretty, but it is honest and that is the best way to honor the memory of a loved one who passes too soon. Hamilton tells his story, Joe's story, and the story of so many young men just like them, going out to live their lives, never imagining where it might lead.

Posted by Sarah @ All The Book Blog Names Are Taken at 2:40 PM