The Poison Plot: A Tale of Adultery and Murder in Colonial Newport 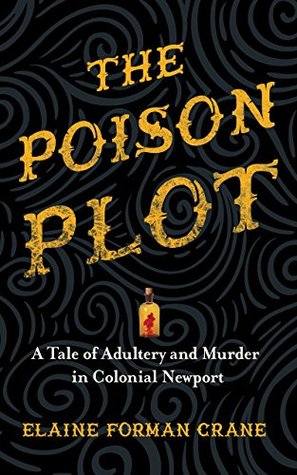 I am not sure why, but I am drawn to stories seemingly like this involving the sensationalized murders committed using (usually) poison. I don't know why this is such a draw - and usually it is Victorian Era cases that I am interested in, but this one went a bit further back, to Colonial Newport in the early 1700s.

I also have to admit that one of the reasons I first requested this book was because I failed to read the subtitle, and when I read the name Benedict Arnold, first assumed it was about THE Benedict Arnold, which made me doubly confused because I thought/knew poisoning was definitely NOT how he died. Oops. Sometimes I am great at reading, sometimes not so much. This is kind of embarrassing, but at the same time, eh, whatever. Everyone at one point or another has done something similar.

This book is marketed as a murder mystery, it says so right there in the subtitle. But the problem with that is, that's not really what the book is about. With so many unknown variables, and the fact that there are no contemporary sources that record Mary Arnold's personal thoughts and feelings, or purpose for her possible actions, it is almost entirely filled with conjecture. A rime example of this appears at 29% where the author states, "Psychological reasons may have bee responsible for Mary's behavior as her life unfolded, although such possibilities are merely conjectural." Seriously, the title of this book should have actually been Conjecture About a Possible Murder and Some Other Stuff About Colonial Newport. It would have been highly accurate, at least.

The death/murder of her husband is dealt with rather swiftly in the first couple chapters of the book. The motive, means, and opportunity are all there, but given how little information there actually is left in any existing records, the author again falls back on the dreaded C-word. The author even states at one point, "Then again, there is no hard evidence that Mary actually tried to poison Benedict or that he was in fact poisoned" (forgot to record what % this was at, sorry!) Well damn, then what was the point of all of this nonsense then anyway?!

My biggest issue really is that the book was not what it purported to be. The drama surrounding Benedict and Mary, he being roughly two decades older than her, she having affairs and burning through his fortune like there's no tomorrow, certainly could make a circumstantial case - especially if Mary might be excluded from receiving anything in her husband's will. All we know for sure is that Benedict became ill. Upon his recovery he filed a divorce petition, indicating the affairs Mary carried on while married was a reason for the divorce. Then Benedict died not long after the divorce was granted. One of the problems is that at that time there was no way to test someone to see if they had been poisoned. So, where is the mystery then? Truthfully, there really isn't one, because there are far too many unknowns.

That the author is a historian, that much is obvious. And I truly enjoyed the dissection of daily life in Colonial Newport far more than I enjoyed the story surrounding the Arnold marriage. We get to see so much of daily life as it would have been for most citizens. The author does a fine job explaining social, political, and economic issues of the period. Perhaps this book would have been better if it had strictly been a biography of the city of Newport, Rhode Island - to be fair, I must say that city biographies are one of my most favorite kinds of books to read, so I would be far interested in that than any "Eh, we don't really know, but maybe?" murder mystery.

As a 'true crime'-ish murder mystery, I can not recommend this book at all. As a snapshot of life in colonial New England, yes, have it. Just ignore the hubbub about the Arnold family.
Posted by Sarah @ All The Book Blog Names Are Taken at 11:56 PM