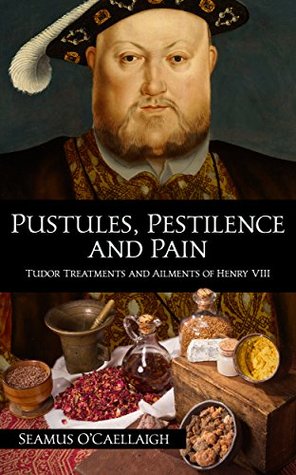 An oft-heard lament today comes in the form of there being very little left to write about in regards to one of the most infamous dynasties to ever rule. Given the larger-than-life caricature Henry has become, it is easy to believe that there is nothing new to write. Here we are shown that is not quite true after all.

Many of Henry's health issues have been documented, though we do not usually get anything in-depth about the actual treatments. Instead they are typically looked at as an explanation for his behavior, particular in the later years of his life. Here the author sets out to explain said treatments and we are given a wonderful and terrifying glimpse into the world of Henry and his health.

The author does a fantastic job in going back to the primary sources - some from Henry VIII himself (who even came up with some of the treatments himself) and relays the information first as it was written then, and then goes on to explain it in modern terms. That was perhaps my favorite part of the book, to see that information side by side. He then goes on to explain in terms of what we know as effective medical treatment today and whether or not said treatments would have really worked. I was endlessly intrigued by the various treatments, though not surprised by the lead and mercury elements, as those have been documented before. The author also uses contemporary letters to explain some of the injuries, in addition to the medical recipes.

The only real complaint I have about the book is not even anything that could have been better - it is something I would need to take care of myself, and that involves the photos. The blurb talks about beautiful color photos (as do a couple other reviews), but sadly mine were black and white, as I was reading on my Kindle. Even then, the photos looked great so I can only imagine what they would like in full color. The author participates in reenactments as an apothecary, so he was able to show off many of the tools of the trade that would have been used in Henry's day. That background experience is always interesting and lends much credibility to the topic.

I really enjoyed the book - don't be put off by the title! The author looks at just a small handful of Henry's injuries, though there were more. I hope the author continues to study the topic and continues writing, as I found this short read to be informative and interesting. I would recommend it both to those who have a general interest in Tudor history, as well as those who feel like they have read everything there possibly is to read - you won't be disappointed with this one!
Posted by Sarah @ All The Book Blog Names Are Taken at 9:07 PM