Under This Roof: The White House and the Presidency 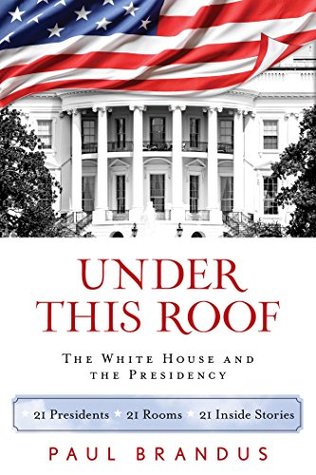 I received this ARC from NetGalley in exchange for an honest review.

I learned quite a few interesting tidbits about so many presidents who I thought I knew well. I also learned that the White House might be the most poorly constructed building in the history of the world.

As stated in the title, this book takes a look at 21 different rooms in the White House and the story of that room as relating to a specific president. The stories flow well for the most part, weaving the wider US and/or world events as related to the purpose of the room and the president of the time. The book contained several pictures per chapter which are relevant, though I wish I would have had a physical copy as I would love to see many of these in color. I also wish there had been more pictures of the rooms themselves at least for as far back as pictures would exist. It would have been nice to see reproductions of Jefferson's design plans that are mentioned. I am interested to see if they still exist, as would it be cool if plans by any other presidents exist also.

Not only is this a history of the White House, but a history of some of these presidencies at crucial times in our nation's history. For example, I did not know that it was ever a question as to who would succeed the president, should he pass away while in office. This issue came to light in the case of Harrison and Tyler when the former died after a month in office. I also do not recall ever learning about Wilson's last 18 months in office when he was no longer actually in charge due to the massive stroke he had that rendered him all but helpless and paralyzed on his left side. It is said that his wife essentially became president and made decisions. That is a very interesting but also a scary prospect.

I was pleased to see a section for FDR, though I would have been surprised if he had not been included. If only he could have lived forever and gone on being re-elected. Would he have made the decision to drop the atomic bombs on Hiroshima and Nagasaki? Could history have been dramatically different?

There is so much history I do not know about so many of the presidents and it is my goal to read at least one book about each man to hold this office. I appreciated this book piquing my interest in some of these men who I have yet to learn about - incidentally I am far more curious now about Nixon than I was prior to reading, when all I really knew related to Watergate. Interesting that such an intensely private person would seek the highest office in the country. He is intriguing.

I realize this is only an ARC as I have received it, so my only real complaint was the final chapter and how it ended. This final chapter revolved around President Obama and the movie theatre within the house. There was no real end to the chapter though, it just kind of devolved into a brief conclusion without any heading indicating as such, then moved to the author thanking those who assisted him, and finally on to the notes. Hopefully in the final copy, this was resolved.

I've never been to the White House, though I was able to see the building from afar on a class trip to D.C. in 8th grade. I was in awe of the ease in which people could just come and go to call on the president in the infancy of the presidency. Of course this would be impossible to do today, but how awesome would that be to just stroll up the steps and see if the president was available for an evening chat?

Overall, this was an interesting look at the White House and 21 important stories in 21 rooms as related to our country's history and I highly recommend it. I must say though, it is a home I am certainly glad I don't live in - I fear one day it may really fall apart!
Posted by Sarah @ All The Book Blog Names Are Taken at 11:23 PM