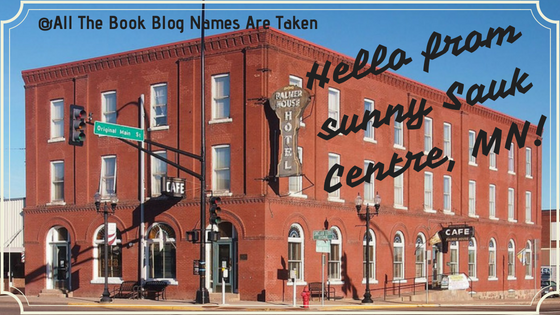 I mentioned in a previous post that Eleanor and I are spending some quality time at home for a few days until school starts. We are having some fun lazy days at my mom's house, and this past weekend we attended a family reunion in a small town called Sauk Centre, Minnesota. This might be a familiar town to those of you who read Sinclair Lewis, as he grew up there. I was extra excited because my grandparents had surprised me with a stay at the Palmer House Hotel, while every else was staying at another hotel a few minutes away. And the reason for this is....

The Palmer House Hotel is haunted!

That was the rumor anyway, and I wanted to see for myself. The Palmer House has been featured on a couple different paranormal shows such as The Dead Files and Ghost Adventures. There have also been several write-ups in the media and such that you can check out HERE. You can also finds books with chapters dedicated to the Palmer House at that link. Mom bought me one, which I am looking forward to reading. 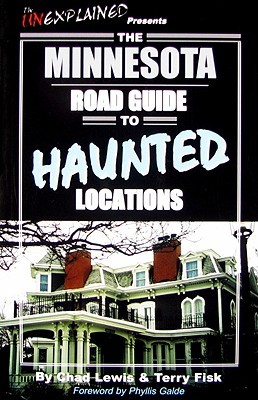 Anyway, this post is going to be kind of long, because there was activity going on from the moment I was unpacking in my room, until literally the moment I left. While I am by no means perfect at this investigating thing, I have been lucky enough to have some interesting paranormal experiences at both the Villisca Axe Murder House in Villisca, Iowa and The Stanley Hotel in Estes Park, Colorado.  I also lived in an apartment for roughly five years that was also inhabited by what we called 'Ghost Baby', because 'Ghost Toddler' just didn't have quite the same ring to it. I try to look for logical explanations first, before jumping directly to paranormal. I have included a couple pictures and videos too, so if you decide to stick it out through the post, hopefully you find something of interest here. Again, I realize this is longer than any review I have ever written, but I wanted to give as many details as possible to give people some context.

To pick up where I left off in the previous post, I had dozed off around 4 AM. I awoke at 6:20 AM to the loud stomping and pacing, and it sounded much like what I had heard a few hours earlier - and again with the sounds of something being moved or dragged across a hardwood floor. I found it interesting when Kelley had shared with me down in the bar that Kelley has often had guests complain about the noise above them, even when staying on the third floor. I need to do a little more research on the original hotel and see if it was more than three stories (excluding a basement). That would definitely account for the excess noise people claim to hear, even when they are on the third floor.

Just to clarify, the current structure has the main floor where the lobby, bar, and cafe are located. The second and third floors are where guests rooms are, as well as housekeeping and such. Yet another time I was so caught up in what I was experiencing at the moment, I forgot to record. Next time I will do much better on this part, especially when I will be able to be there for a couple days.

After checking the items I had left out (the ring, ball, candy), I was disappointed to see that nothing had been moved. I went back to sleep not long after and woke up for good again around 9:15 or so. I checked a second time, but nothing had been moved. With less than two hours until check out, I wanted to get up to the playroom on the third floor to see what I could find. The room is colorful, friendly room without a door on it, filled with books and toys - especially bouncy balls of different sizes that any kids would love to play. 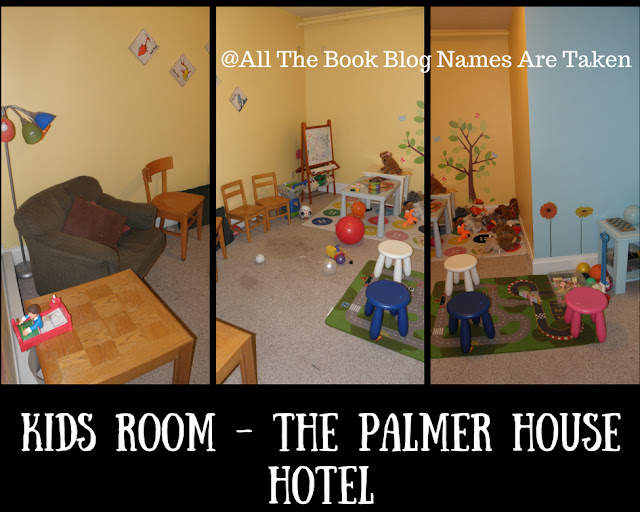 There are stories of a little boy who likes to bounce a ball up and down the halls. Kelley had mentioned this room the night before and said I should make time to read a story to the children. Guests who have done so have reported it feeling like someone has sat down near them or even on their lap. After taking a few photos, I sat down on the floor with the KII on, plus the small ring and ball Kelley had given me the night before. I also set up my camera to record myself and the room while I was reading - I chose a Berenstain Bears book. 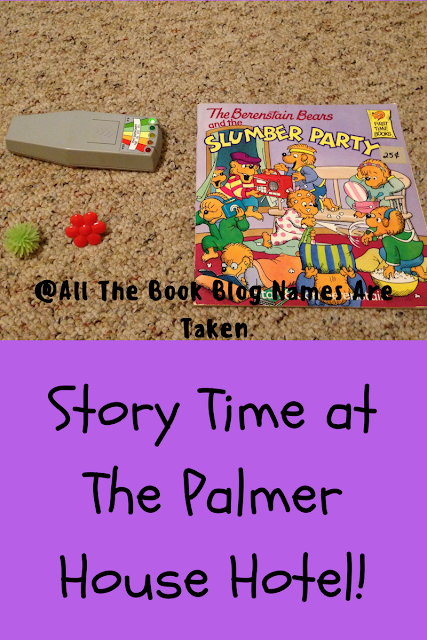 I kind of look like a hot mess after so little sleep, so I hope you can forgive me for not posting it here. I did not see any visual evidence when I watched the video, nor did the KII ever light up above its baseline, but part way through the book I felt a cold spot descend on me, from over my right shoulder and I noted this on the recording. It settled on/around me for about ten seconds, then went away. I did take video of the room also as I walked and talked a bit, but again there was no activity.

After I left the kids room, I decided to take one more video of the hotel itself on the second and third floors, to see if I could see or hear anything. I was about to start when a housekeeper came out of the laundry room. I spoke to her for several minutes there on the third floor. We traded some of our stories, then she went down to the lobby and I continued with my plan to record on the second and third floors to see what else I could find. I hoped to get more audio or visual evidence, but did not. I returned to room #11 after this. I prayed for Annie again and as I was doing so, the KII lit up to the second light briefly in the last two minutes or so. It wasn't huge, but was something - the only activity I had on it aside from the initial camera battery incident. I've been trying to trim the video because I keep getting an error message saying the video is too long. Technology is frustrating me greatly tonight, but hopefully I can get it figured out and add the video at a later point. For reference, the KII lit up when I said I would come back, and also when I prayed for Annie to peace and comfort.

By this point it was 10:30 and I had to get going. I had to check out of my room by 11, then get over to the other hotel to pick up my mom and daughter who also needed be out by 11. This would not have been such an issue, except I had borrowed a Bible from their room and had forgotten to take it back after I verified that there was one in my room. As I got everything together, I opened the door and stood in the doorway. I said out loud that I appreciated Annie letting me stay in room 11 and that none of the spirits there could come home with me, but that I would be back to visit again. Then I closed the door and headed down to the lobby.

Down in the lobby I spoke to the housekeeper again while I waited for Angie to return to the desk. When she came back, she asked about some of the activity she'd heard of from the housekeeper. As we talked I put the KII meter and temp reader on the desk and Angie asked how the KII meter worked. I turned it on and as I explained the lights, how it lights up full twice before returning to the baseline. While I was talking, Angie was doing something with her phone, and at that same time, the KII started lighting up like crazy, all the way to red, repeatedly. This was the most active it had been in my entire time at the Palmer House, as it consistently lit up red multiple times.


(Don't mind my phone ringing - my mom was calling, wondering what was taking me so long 😂)


Angie then showed me the EVP app she had opened on her phone. EVP stands for electronic voice phenomenon, something investigators use various audio devices for in order to hear any responses by a spirit. I asked Angie to moved her phone away from the KII, just to make sure it was not causing the surge. She moved the phone away and the lights continued going straight to red. Angie then asked who was in the lobby with us when the app reported 'Entity Detected'. We got a response, right there in broad daylight in the middle of the lobby...

The voice identified itself as Annie.

Angie then asked me it I had any questions for Annie, since she was here, and OF COURSE my mind went totally blank. I was in shock. Angie asked Annie if she liked having me stay in room 11. Angie handed her phone to the housekeeper I had been speaking to earlier as we finished up the paperwork. She handed me the replica key chain from room #11 that I wanted to purchase - but I had to pay for it in the cafe. Annie had been quiet for a second and this super weird EVP came through that said, "It's coming for you", which was creepy and weird and none of us knew what it meant or who it was talking to.

Annie responded after that, with a message that made me feel happy and sad at the same time. Clear as day she said, "Don't leave."

The housekeeper had come into the cafe after I made my purchase and said Annie sure must have liked me to not want me to leave. I was happy because I felt like we had bonded, but sad that all of this was happening right at the worst possible time, and  could not stay to talk to her any longer. As I exited the cafe and returned to the lobby, I said goodbye to Annie one more time and said I would be back to visit again. 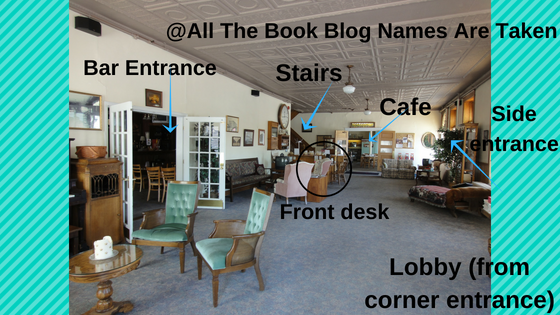 I found this image online at Wikimedia Commons HERE. Only the editing is mine. 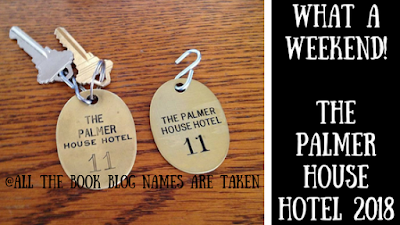 So what do you think? Have you ever experienced any paranormal-type activity? Do you believe there are 'no such things as ghosts'? I'd love to hear your stories and opinions!
Happy Reading!
Sarah
Posted by Sarah @ All The Book Blog Names Are Taken at 12:36 AM

Email ThisBlogThis!Share to TwitterShare to FacebookShare to Pinterest
Labels: I Could be a Ghost Hunter, The Palmer House Hotel