Queen of Thieves: The True Story of "Marm" Mandelbaum and Her Gangs of New York 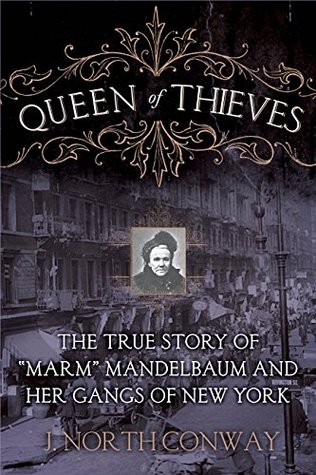 I love when authors throw around 'credentials', as if that somehow exempts others from having opinions about their trash books. As for the movie option...hopefully they have a great screen writer to deal with horribly sexist and repetitive source material 😂

Such a wholly fascinating woman deserves a much better book.

Prior to reading this, I had never heard of Fredericka Mandelbaum, described as a "poor Jewish woman who rose to the top of her profession in organized crime during the Gilded Age in New York City" (from the book page on Goodreads). When I found this one, it was a no-brainer, OF COURSE I would read it. Gilded Age New York is on of my favorite periods to read about and I am always on the lookout for new subjects from the era.

The problem then, is literally everything else. I can not count the number of times her appearance is referenced. We are told as many ways as possible that she was a large and unattractive woman. Finally the author gave in on what he seemed to be waiting for the whole time and simply called her fat. It was truly gross how often her physical characteristics were mentioned - as though it is somehow unusual that supposed ugly people find success in whatever avenue they pursue for their career of choice? Whatevs, I've no time for that. And normally, I would have chucked this to the DNF pile after the fifth, twelfth, zillionth time her appearance was mentioned. But I persevered because I know of no other books about "Marm" and wanted to glean as much information as I could, despite a completely sub-par attempt to give this woman a proper biography. One might be able to shrug this off despite the ABSURD amounts of repetition, except the author then goes on and does the same thing to one of Mandelbaum's proteges, Sophie Lyons, who he mentions time and again as being beautiful, using her looks to get out of trouble, etc. The complete and utter reliance on talking about appearances was not only ridiculous, but repetitive, repetitive, repetitive. Like, almost word-for-word repetitive sometimes, as we will get to in a moment in regards to the other colorful characters who fill the pages.

I am trying to not be a total negative nelly in reviews because writing is hard, and authors pour so much of themselves into their books. But said book has to be edited, it just does, there is no way around it. I feel like perhaps another couple of rounds with a good editor could drastically improve the text. I was at first impressed by the use of contemporary sources, but for quite a stretch there it seemed that those sources were taking up more room than the author's own commentary and/or analysis of said sources. I feel like this book has potential, but will never see that as long as the book remains as-is. Mandelbaum's story is practically THEE American Dream. She reached a height of wealth that others could only dream of, with the protection of the police, judges, and Tammany Hall. While it was not by honest means, for a Jewish woman to do so, while her husband turned a blind eye and knew "nothing" of her fencing stolen goods, is an honest to goodness miracle.

I did select a few quotes of interest, because I do feel like Mandelbaum's story is worth telling, worth knowing. It just needs to be in the hands of a better editor, and possibly writer as well.

"At the height of her criminal career, every New Yorker knew their best chance to realize a profit from their ill-gotten gains was to trust "Marm" Mandelbaum. She was also partial to helping young women get a foothold in the criminal world. She was once quoted as saying that she wanted to help ant women who "are not wasting life being a housekeeper." Because of her efforts to help women find work, even if it was in the world of crime, some contemporary feminist historians view Mandelbaum as a Gilded Age heroine for her willingness to assist women finding work and helping them make more money than they could have as housekeepers, maids, seamstresses, or factory workers" (2%).

More than a couple times, the author mentions that Mandelbaum opened a "school for crime". How would this even work? Like, seriously, the logistics simply are not there. How does one go about opening a school for crime, and operating la-di-da like it is no big deal. Obviously police officers on the beat would have to be paid, but how was this ever a thing? We are given almost zero other information about it, which I expected because it would have had to have been pretty secretive - but how do we then have any knowledge of it to begin with? The story concludes with the author stating Mandelbaum "...allegedly had to close the school when it was discovered that that son of one of the city's most prominent police officials was enrolled in it" (3%). Really? Later the author comes back around to this topic, as he often and repetitively did, but this time at least added further information about this so-called 'crime school'. He detailed the 'courses' offered and marveled at the fact that the school was quite near the police headquarters. Mandelbaum apparently offered all kinds of classes to any aged pupil, and both male and female students. They learned about burglaries, safe-cracking, and blackmailing rackets. Additional advanced classes were taught as well in those areas, while supposed "doctoral level" classes were offered in confidence schemes and blackmail. Students who were particularly astute were given free advanced courses, and the "best and brightest graduates were offered salaried positions with Mandelbaum, but they had to turn over everything they stole directly to her and no one else". The school operated for roughly six years according to the author, until again we are told that the son of a police official was discovered as being enrolled, and thus Mandelbaum closed the school. I suppose when you pay the right people, anything is possible.

I did appreciate the author really setting the backdrop for how and why a life of crime might be necessary for survival in this period. it might sound a little sensational to someone unfamiliar with the city at the time, but I do feel like this quote sums up quite accurately what life what like at that time for those not part of the 'gilded' set.

"The worst of all the slums was the villainous Five Points in the Lower East Side, a den of almost unspeakable gore and horror. It was the home to the city's most vicious criminals, robbers, prostitutes, and confidence men. Five Points derived its name from the crisscrossing intersection of Anthony, Cross, Mulberry, Orange, and Water Streets. There were no legitimate businesses in Five Points except for a very few grocery, dry goods, and clothing shops. It was filled with narrow streets alleys running every which way...the nearly falling down tenements and sheds there housed hundreds of poor immigrants who were at the mercy of the gangs, many of whom worked for absentee landlords collecting rent...Day or night Five Points was the scene of an uncontrolled abundance of murder, mayhem, robbery, and theft. No one, including the police, dared to venture into this den of thieves and murderers..." (7%).

Here I have also chosen to include some of the many instances where the author refers to Mandelbaum's appearance. I did not include all of them, as there were so many. By 8% her height and weight had been referenced three times.

"...her clients, both sellers and buyers, knew that this huge, dark-eyed, corpulent woman didn't question whether the merchandise she traded in was legitimately or illegitimately acquired" (10%).

And "Already an imposing physical presence, she kept her outward appearance unobtrusive...despite her criminal vocation and her height and her girth..." (20%)

And still more. "Mandelbaum saw in the young and beautiful Lyons the image of how she wished she had been. Mandelbaum, tall, fat, and unattractive was drawn to the waif-like beauty of Lyons" (37%). There are others also, but I think by this time one gets the point. The author is utterly fixated on what he perceives as her grotesque appearance and can not leave it for a moment. It is a constant throughout and totally unimportant.

While on the whole, this book is in need of some serious changes for it to be a worthwhile read, there is valuable information in there if you have the patience to wade through the rubbish and find it. Mandelbaum was no saint, but she was an unique woman living in difficult times. She managed to stay out of jail throughout her entire career, not for lack of trying on the part of reformers seeking to end the corruption at all levels. Even during the trial that would effectively end her career in NYC, she managed to elude the Pinkerton detectives who had so painstakingly built a case against her for months. Mandelbaum was highly intelligent and a more than capable foe for those seeking to put her and similar operations out of business for good.

"On February 26th, 1894, Fredericka Mandelbaum died in her home in Hamilton surrounded by her family and Stoude. The cause of death was reported as Bright's Disease, described in modern medicine as a chronic form of nephritis or kidney disease. She was sixty-five years old.  Although the obituary notice that appeared in the Hamilton Spectator took note of her criminal past, it called her 'a woman of kindly disposition, broad sympathies, and large intelligence'".

Mandelbaum deserved a much better biography than this.
Posted by Sarah @ All The Book Blog Names Are Taken at 11:44 PM