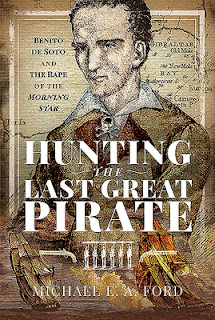 A book that I anticipated to breeze through because, HELLOOOO! PIRATES! ended up taking me a few months and that was incredibly disappointing. I just could not get into this book.

It has all the makings of a fantastic story - an unarmed Quaker vessel carrying a couple dozen men, women, and children traveling in a protected convoy, on its way to pick up injured British soldiers and return them home. Unfortunately the ship also contained heavy crates of recovered treasures, which slowed the ship down considerably, making it a prime target for the likes of Benito de Soto or any other pirate captain with a sharp eye out for plunder that day.

As soon a de Soto and his men had taken what they wanted from the ship after executing the captain and crew, they locked the survivors in the hold and set the ship on fire. They fled with their spoils to Spain.

De Soto returned to his former village in Galicia, Spain, to bury his portion of the stolen treasure. He then set out for Gibraltar to sell other items he'd stolen. Bad move on his part, since the British still controlled Gibraltar at that time and he was recognized, despite using forged documents claiming a different identity. De Soto was arrested and put on trial, despite circumstantial evidence at best and no eyewitnesses who could definitely say that they saw him commanding the pirate crew. Even so, he was convicted and executed by hanging in the early 1830s. Nearly 100 years later, the court was proven correct when, in 1926, excavations and renovations in Galicia uncovered the treasure de Soto had buried there before heading off to Gibraltar.

Now, you might be wondering how it was possible for de Soto to even be arrested for his attack on the Morning Star, considering his men set it on fire and left everyone for dead. Turns out, due to one incredibly fearless woman in particular, she was able to lead the others into figuring a way out and miraculously, the Morning Star slowly but surely made its way to port. Word spread rapidly about what had transpired.

Yet, after all of that, still only three stars and I'll tell you why - it was not an exciting book. It was beyond dry in the telling of it and I could not force myself to keep reading for very long periods at a time. I don't understand it, as the story is captivating. As someone who primarily reads non-fiction, I tend to love books that others consider dry, and I find them absolutely riveting. Yet, not so with this one.

This was an absolutely horrific account of the violence and cruelty meted out by pirates across the globe. It is not the charming silliness of Jack Sparrow and his motley crew, and one should not expect that in reading about real pirates - vicious and merciless hunters who had no qualms about killing anyone they chose. But even so, I expected that story to still be engaging. The story lulled at times, especially in the aftermath.

Overall I would not say this is a bad book or that you should avoid it. There is much information here about the incident itself, de Soto's capture/trial/execution, the realities of life at sea in the 19th century. Just understand going in that if you are looking for Jack Sparrow, you will definitely not find him here.

Posted by Sarah @ All The Book Blog Names Are Taken at 2:19 PM