NetGalley ARC | Maiden Voyages: Magnificent Ocean Liners and the Women Who Traveled and Worked Aboard Them 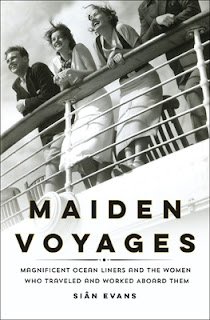 I probably would have given this four stars, or at least three and a half, if I would not have had to read about the journey of the mother of the worst president in the history of the United States.

Aside from that drivel, this was a book packed with tons of interesting anecdotes and gossip and I feel the author did a fantastic job portraying life at sea for these women and how their work evolved over time.

I enjoy this period of travel. I love that the author focuses specifically on women and how they made a living on the massive liners that once ran regularly between the US and Europe.

I appreciate that she focused on a a wide variety of women, from all walks of life. We read of celebrities, artists, and the wealthy travelling for pleasure, migrants and refugees seeking safety and a new life, as well as the women who worked for the great shipping companies, sending their wages back home to help care for parents and siblings.

I found women on the crew to be of the most interest to me. I admire these women who worked these long, hard hours at sea to provide for their families. Violet Jessop is mentioned here and I absolutely recommend her autobiography, which I wrote about HERE. Not only did Violet survive the sinking of Titanic, but not long after she survived the sinking of the Britannic (Titanic's sister ship) as well. Her book is a wonderful look into her life, in which the famous and not-so-famous shipwrecks play but a small part. She had even been aboard the Olympic in 1911 when it collided with the HMS Hawke.

There were times when the narrative was very slow and felt like a slog. This could be a personal thing, as we learn plenty about those who travelled by liner because they had the money to do so, sailing back and forth between the Old World and the New. Still, it did take me a bit to finish this one and some passages and stories were not nearly as interesting as others.

There were times when the book became a bit repetitive as well, especially when stories were similar. Not always, but enough to be noticeable.

I never really thought about until this book, just how critical this work was for women who sought independence and a way to support themselves. To say that it changed countless lives would not be an overstatement. Slowly but surely, as women began travelling more, the need for stewardesses arose to help tend to them aboard the ships. That role of stewardess even evolved over time as some women were able to become conductresses and coordinate activities for the passengers. And then as two world wars came, women were able to stay aboard as nurses and continue to make a life for themselves.

Overall I appreciate the author's work and the research that went into the book. She's given a voice to many women who otherwise might remain unknown to us today.

Posted by Sarah @ All The Book Blog Names Are Taken at 8:13 PM