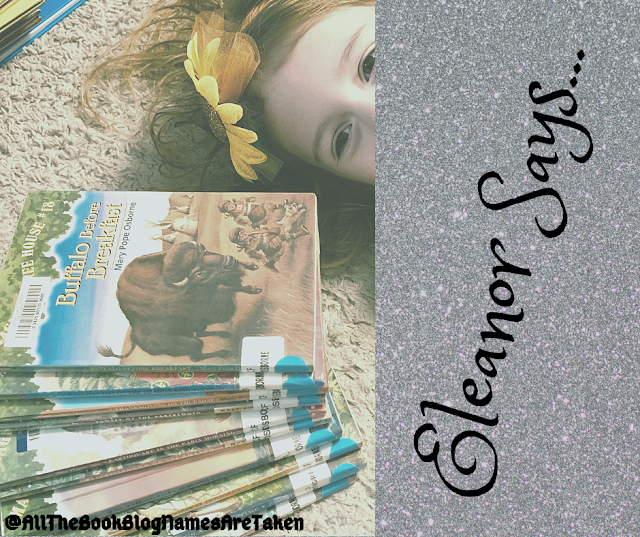 I started this feature in order to not only give children's books more time and space, but to hear from a child about the very books they should (or should not) be reading. Eleanor often pretends to be blogging on her own 'laptop' and I thought this would be a fun way to combine the two things I love most: my daughter, and books.

While I try not to blog too much while Eleanor and I are both home, she knows that I write about books I love and loathe, and that I have a blog. I asked if she would like to tell people what she thinks of kids' books, and if we could put her ideas on my blog too. She liked this idea a lot. I explained to Eleanor what the star-rating means, and that she can say anything she thinks about the book, that nothing is wrong; she can talk about things she did or did not like, as well as how the story made her feel. She now asks as soon as we finish a book if we can talk and write about it.

Here are Eleanor's thoughts on a few of our recent reads, straight out of her six-year-old brain:

⭐⭐⭐⭐
Mom says: This is actually my least favorite of all we’ve read so far, which is a bummer because I like reading about pirates.
Eleanor says: I liked when the pirates put Jack and Annie on the ship because they wouldn’t tell the pirates where the treasure was. But they couldn’t tell the pirates because they didn’t know. The cabin was stinky. Annie found the whale. Seeing Morgan was awesome, because we got to see how they met (Mom note: we’ve read the books out of order). Mommy and I thought Morgan helped them on their trips and we were right. Morgan was the pteranodon, and the knight and the cat and the parrot. She kept them safe. We know they will have more adventures.

⭐⭐⭐⭐
Eleanor says: I liked when the two boys gave Annie and Jack the message they carved. The message was about having hope. I would have been totally scared in the earthquake. Annie and Jack were scared but they still wanted to help, so they gave the two boys their shoes. Annie fell in a hole in the earthquake, but Jack helped her by bringing bricks for her to stack so she could get out. I would be so scared of the fire burning up all my books. This was a good story.

⭐⭐⭐⭐
Eleanor says: I liked learning about how the mummies got put into tombs. There was a funeral procession. First they went the Beautiful House. Then they went to the pyramid. The pyramids and tombs got robbed by tomb robbers. The tomb robbers got beaten and they died if they got caught. They wanted to steal the mummy treasures. I also learned how the mummies get wrapped. It looks like toilet paper, but it is strips of linen. It took a long time to make the body into a mummy. I think this is a good book to teach kids about ancient Egypt. I learned a lot.

⭐⭐⭐⭐
Eleanor says: The Ice Age people isn’t have electricity so they had to use fire to see. When lightning struck it might have started fires. Neanderthals skulls were bigger than ours and it’s forehead was down to its eyes. Homo sapient like us, our teeth show better and don’t stick out like Neanderthals. Our eyes are bigger. The Cro-Magnon people made instruments and forts with animal tusks, skulls, fur, and with branches. I learned a lot, like how they put drawings on their cage walls. We learned about sabertooths, they were big. The people drew pictures of animals on the face walls. I liked this book. I learned new stuff about the ice age.

⭐⭐⭐⭐⭐
Eleanor says: Five stars because I love the ship so much and I missed it really much. I love learning about Titanic. It’s my favorite ship. I was sad when it sank, because so many people died. The people didn’t have to die but there were not enough lifeboats. That was not the people’s fault. The owners didn’t put enough lifeboats on. My mom likes to sing me the Titanic song and it gets too noisy. She sings it too loud and is so dramatic. This is a good book for kids to learn about Titanic. There is a lot of information.
Posted by Sarah @ All The Book Blog Names Are Taken at 7:39 PM