We spent a fun-filled week with my mom, going to some of Eleanor's favorite places for lunch and yummy fro-yo treats, getting manis and pedis with our BFFs, taking home a brand-new bike without training wheels (that we are still working on mastering) and even getting an extra special tour of The Durham (no, I will never stop shouting about this place. If you thought they were awesome before, just wait until you hear what they did for my girl's birthday.)

Wednesday was THE DAY. Eleanor turned six, and she opened lots of little gifts from my mom and I, mainly her favorite books and Tinker Bells DVDs that she did not have (no joke, the NeverBeast makes me cry. Every. Single. Time.) We planned to go to story time at the Durham, then show my mom the Scotty exhibit because she had not seen it yet. As Eleanor was getting ready, I thought about what else might make this trip special. The Durham is the former Union Station that opened in 1931. It was converted into a museum in 1975. There is space at one end of the building that has long since been converted in offices, and there is a visible walkway on the second floor going from one side of the main hall to the other. Eleanor always sees employees walking along there and asks to go, but I have explained (more than once, she is stubborn!) that she doesn't work there (yet) so she can't go. I took a shot emailing one of the employees we have gotten to know and asked if it would be possible for Eleanor to go up there for her birthday, and that we were on our way for story time. I did not see his reply by the time we arrived, but as we walked in Mr Taylor and Ms Emma were standing at the front desk. I asked if he'd seen my email and he said yes, they were waiting for us! Eleanor was so excited she could hardly stand it, and we got to go up the back stairs and she finally got her wish, to stand on that walkway and look out across the whole main floor. 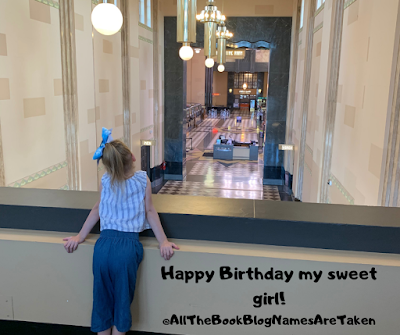 Not only that, but she got a sneaky peak at some other places not normally seen by the public - who knows, maybe Eleanor's future office will be up there one day!
Ms Dawn met us up on the walkway, and asked to take a couple photos. She then gave Eleanor a special little gift that someone had mistakenly turned in to lost and found, and said they had been waiting for someone special to pass it on to. It turns out that this small rubber duck with a graduation cap reading '2019' was one of a handful that had been placed in various locations all around the world, along with dozens and dozens of painted rocks, to commemorate a young woman named Payton who has passed away very suddenly two years yesterday, at the age of 16. Her mom had placed these, along with a note explaining their purpose, and relied on strangers to find them and continue to spread her daughter's love around the world with the hashtag #LiveLikePayton. There is both a Facebook page and an Instagram account, and Eleanor and I are so honored to have been part of this mission. We placed the duck today in a special place, said a prayer for Payton and her family, and are excited to see who might find her next. 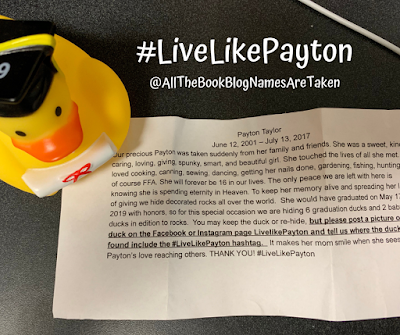 Time and again, I was struck by how many people knew who Eleanor was before we had met them, and so many wished her a happy birthday. Another staff member, Ms Emily, also presented Eleanor with a picture she'd made, and it was signed on the back by all the camp staff members. AND ON TOP OF THAT...after story time, Ms Emma unlocked two of the special rooms that patrons are only allowed to look in, as there are original artifacts from the time periods that they belong to in the rooms that are very precious. First Eleanor got to go into the replica log cabin and Ms Emma told her some stories about the different items in the room. We went to the one-room schoolhouse replica next, where Ms Emma had written 'Happy Birthday Eleanor' on the chalk board. Here too Ms Emma explained some of the artifacts and what life would have been like going to school in that time.

After the extra special tour/exhibit visits, we showed my mom Scotty, and enjoyed a yummy birthday lunch at the soda fountain.

All good things have to come to an end, and my mom had to head back home today. After church this morning Eleanor and I had a very calm and lazy afternoon, snuggling and watching movies. It was the perfect end to a special week filled with special people who showed once again just how much they care for Eleanor and me. We are truly blessed.

Love,
Sarah and Eleanor
Posted by Sarah @ All The Book Blog Names Are Taken at 9:59 PM

Email ThisBlogThis!Share to TwitterShare to FacebookShare to Pinterest
Labels: Other, The Durham