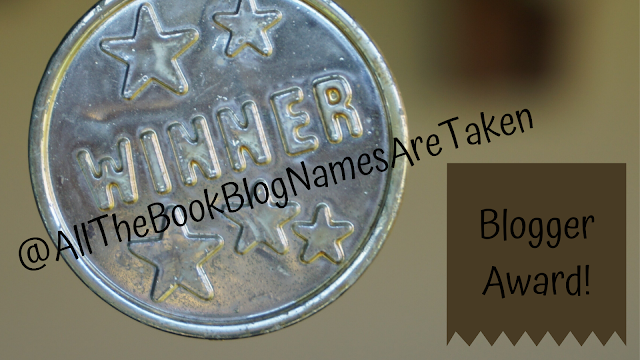 I was nominated for the Mystery Blogger Award by Ashlee at Books are 42 in the last week of May, and it has taken me a bit to get to this because of everything going on right now, and my mind and heart being elsewhere besides with reading and reviewing and book blogging. This is my first time being nominated for this award, thank you Ashlee!

The Mystery Blogger Award is an award for amazing bloggers with ingenious posts. Their blog not only captivates; it inspires and motivates. They are one of the best out there, and they deserve every recognition they get. This award is also for bloggers who find fun and inspiration in blogging, and they do it with so much love and passion. The Mystery Blogger Award was created by Okoto Enigma on her blog way back in 2016.

Rules
1. Put the award logo/image on your blog
2. List the rules
3. Thank whoever nominated you
4. Mention the creator of the award and provide a link as well
5. Tell your readers three things about yourself
6. Answer the questions provided by whoever nominated you
7. Nominated 10 - 20 people
8. Notify you nominees by commenting on their blogs
9. Ask your nominees any five questions
10. Share a link to your best post(s)

Three Things About Me
Eddie and the Cruisers is my favorite movie of all time. I was OBSESSED with this movie from the time I was about four or so. I didn't understand all of the plot but I loved the music and have easily seen it hundreds of times in my life. I introduced Eleanor to Eddie and the Cruisers when she was four as well, and she loves it as much as I do. It is kind of weird to watch it as an adult, because in my mind as a child, Eddie was so real, it wasn't an actor playing him. These characters were my friends, and now I still feel like a kid watching the movie over and over again. And yes, I still know all the songs by heart.

I have never broken a bone (that matters) in my entire life, and my only surgery ever was my emergency c-section when Eleanor was born. I played sports growing up - basketball, volleyball, softball, and threw shot-put for track, but always managed to keep all my bones together. I have had so many broken baby toes and once my big toe on my right foot, but those don't really count as far as I am concerned because there's literally nothing you can do for them.

On our 8th grade class trip I was among a group of students that got kicked out of the FBI building, despite taking no part in the thing that got us kicked out. We were explicitly told multiple times that we were not allowed to take pictures anywhere inside the building. After our tour ended it was starting to drizzle, but our bus had not yet arrived to pick us up. A couple of us were waiting in the tiny lobby area while the rest of the group finished up in the gift shop. A kid from our group decided it would be okay to take a picture in that little waiting area because there were no agents around. Literally the moment the picture was snapped of him and his girlfriend, the employee from the gift shop was at his side. She took his camera and pulled out all the film, exposing every last part of the film. Bummer for him that this was not our first stop of the day and we had already been to a couple other sites. Bummer for me because I had to wait outside in the rain with the rest of the idiots who thought it was a good idea to take a freaking picture in the FBI building after having been warned multiple times what would happen if anyone did so.

Ashlee's Questions
1. What fictional mode of transportation do you wish you could take?
I would ride around all day on Nate Macauley's motorcycle, as long as he was driving it.

2. What three fictional characters would you go on a road trip with?
Just one. Nate Macauley. It would be so awkward if Bronwyn was there, since I would totally be stealing her boyfriend.

3. If you could invite your favorite author over for dinner, who would you invite and what would you serve?
Duh. Dan Jones, the coolest historian ever. We'd probably just drink a lot of beer and I would make him tell me absolutely everything he knows or thinks about Eleanor of Aquitaine.

4. What was your favorite picture book when you were a kid?
Max the Bad-Talking Parrot by Patricia Brennan Demuth. My mom read it to me a million times, even long after I could read it myself. I loved loved loved this book and it remains one of my most favorites. A couple years ago for Christmas my mom gave Eleanor and I each a copy.

5. If you had to add a regular non-bookish feature to your blog, what would you write about?
I care very deeply about social issues, particularly in regards to abortion rights, #BlackLivesMatter/Persons of Color in general and dismantling systemic racism, and LGBTQIA+ rights. If I blogged about anything else, it would be those topics - though I do blog about them often anyway because I read a lot of books covering these issues.

My Questions
1. Is there any book you have collected multiple copies/editions of, and if so what makes that particular book so special to you?

2. If there is any book or series you could rewrite the ending to you, which one and why?

3. Do you prefer stand-alones or a series?

4. What is your favorite hobby outside of reading?

5. Are you more likely to pick up a newly released super-hyped book, or do you wait until the furor has died down before giving it a try?

My Nominations
You probably know who you are already, but here you go anyway. As always, play along if you would like, or don't know. But know that even though I tag roughly the same collection each time, it is because you are bloggers who I enjoy "spending time with", and who I have learned from. Thanks for being an inspiration!

Ethan @ A Book A Week

Lindsi @ Do You Dog-ear?

My Best/Favorite Posts
Book Review | Eddie and the Cruisers

That Time I Met Dan Jones

My Three-Part Series on the (HAUNTED!) Palmer House Hotel

My Non-Review and Review of the Beastie Boys Book

There you have it! Thanks again to Ashlee for nominating me.

Happy Reading!
Sarah
Posted by Sarah @ All The Book Blog Names Are Taken at 8:56 PM