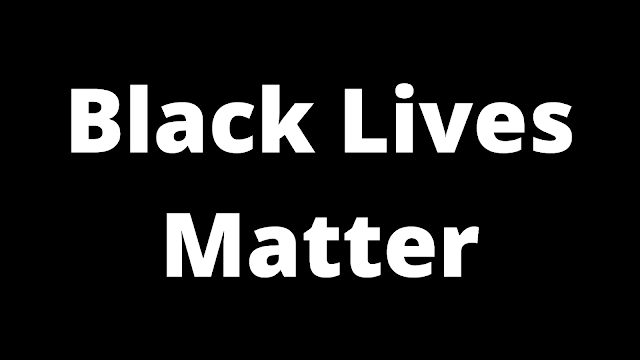 I have been largely silent over the last week, but not for lack of anything to say. Blogging has felt so trivial and unimportant that despite a huge backlog of reviews I am trying to get done, I don't care right now.

One of my most recent posts referred to the horrific murder of George Floyd by a former Minneapolis police officer. That this happens at all is devastating and must end. That it happened in my home city, a place I love so much, made it that much worse because I can't be home right now to march and protest and demand justice for this man.

However, I could protest here in Omaha, and that is exactly what I did on Saturday night, May 30th. I had spent much of Friday the 29th after Eleanor went to bed watching livestreams of the protests, officers firing tear gas and rubber bullets at peaceful protesters, and not-so-peaceful protesters. I watched people commenting, asking why people couldn't be more peaceful, pretending they would acknowledge the pain and trauma, if only the protesters would be "nicer" (read: quieter). Well guess what? People have already tried to protest peacefully for YEARS and it wasn't the "right" (read: white) way, so everyone complained about that, too.

But Saturday night I decided I could not spend another night watching someone else's livestream.

I watched a man venting his anger using only his words, furious over the injustices we were protesting, only to see one of the four officer from the parked car he was yelling at flip on the lights and get out. I watched three officers wrestle this man to the ground, slamming him to the pavement. I watched three additional officers pile on before the man was handcuffed and dragged to a waiting van.

That's when the water bottles came flying, not from the protesters lining the streets but a smaller group up the slope who had gathered in the Target parking lot behind them. I watched the protesters turn and scream at them over and over to stop throwing things at the city police and state troopers. Then came the flash bangs, tear gas, and rubber bullets.

I watched a line of officers eventually move at the crowd, pushing those same protesters into the smaller group of agitators - literally pushing them, some falling to the ground as they lost their balance. Still the officers pushed forward, mixing the groups together, continuing to fire tear gas.

A friend texted to ask if I was safe, saying that it was being reported that people were throwing rocks and bricks at the police. I was across the street in a smaller group of protesters, but with an ample view of the largest group, those who were suddenly being corralled into the lot. I saw no rocks or bricks thrown the entire time. Water bottles, yes, most flying without even their lids. Still, no rocks. No bricks.

Then on the opposite corner from that main body, we were pushed to the parking lot behind us from the sidewalks, a place we were legally allowed to stand.

More and more tear gas was fired. An officer fired off several rubber bullets within ten feet of me. I did not see what caused him to fire, but saw a young woman put into handcuffs, sobbing, taken away to another waiting van.

More tear gas. Officers across the street continued pushing the crowd in that Target parking lot back, pushing and pushing in a line until they had all moved out of sight down the slope on the other side. After that, all we could see to know anyone was there were the clouds of tear gas still rising.

Two blocks north of the intersection a crowd assembled who had escaped the tear gas, some protesters breaking off from the group I was in. More tear gas. So much tear gas, you could no longer see the Wal-Greens sign, nor the road in front of it. So much tear gas it looked like a heavy, dense fog. So many more rubber bullets fired.

Around 8:30 a patrol car began announcing that this protest was now considered an unlawful assembly and we needed to leave, or further action would be taken.

The corner where the main body of protesters had been completely cleared once the officers had corralled them up beyond our line of sight. Many had run across the street and tried to re-assemble, but continued to be fired on. That second corner was then cleared of protesters.

As the big trucks came out, we were told that if we did not leave immediately we would be arrested. The officers had moved counter clockwise around the intersection to clear them. Mine would be last. I watched officers moved in a line toward the third corner, the announcement repeating over and over that we must leave, or we would be arrested. I watched this group of protesters holding their ground. Not throwing anything. Not even yelling or chanting anything. Standing there, as was their right. Holding their signs, exercising their right to protest the injustices that seem to have no end in sight. These protesters were then shot at with rubber bullets and tear-gassed just as all the others had been.

I finally had to leave as the announcement continued, as the clouds of tear gas began drifting over myself and those with me on the final corner of the intersection that had not yet been cleared.

I finally made it back to my car and headed home, wondering what the rest of the evening would bring. I heard rumors as I walked to my car that protesters were gathering downtown in the Old Market.

It was less than three hours after the police had broken up the protest at 72nd and Dodge, that a young Black man named James Scurlock was shot and killed in the Old Market by a white bar owner named Jake Gardner. There is security camera footage and cell phone video. There is footage of James Scurlock being shot, yet Gardner was never arrested and was released the next day. There are many things to know about Gardner, such as that he is an unfortunately well-connected scumbag who is racist, homophobic, and transphobic. The gun he carried and threatened the group with, his permit is expired. Business owners were explicitly told to NOT go to their businesses, or "defend" them. Gardner at one point fired two "warning shots" - this is illegal, point blank. Yet Gardner, a former Marine, posted on Facebook just a few hours earlier that he was going to be on a "military style firewatch" at his bar that night. There are some conflicting reports, reports of racial slurs being used against James Scurlock and those with him, reports of police refusing to take witness statements, all kinds of things going on.

County prosecutor Don Kleine (a friend of Gardner's) held a press conference on Monday afternoon at 1:30 to make a statement about the death of James Scurlock and status of Jake Gardner. It is interesting to note that I received an email from my property manager early in the day stating that all employees would be leaving at 1 PM to ensure their safety. Businesses all over the city were closing by 1. Our fave museum was evacuated at 12:30.

As you can probably guess, the press conferences was a load of bullshit - and doesn't that tell you that you've probably made a mistake, when you have to shut down an entire city because you know people will be in the streets, louder and angrier than ever before? As expected, only certain parts of videos from Saturday night were shown. The necessary audio was mysteriously not played to accompany the videos. Kleine himself gave a running commentary, which to me amounts to already tainting the potential jury pool. In so many words, he basically blamed James Scurlock for his own death. AND also could not even be bothered to remember the victim's name and kept referring to him as 'Spurlock', even AFTER being corrected.

So, where are we today?

Protests have been going on here since last Friday the 29th. When it was announced there would be no charges filed against Gardner for the murder of James Scurlock, a 72 hour state of emergency was declared and an 8 PM curfew imposed. Once Kleine realized people were not going to accept his bullshit explanations, he finally agreed to put a special prosecutor in charge of the case and call a grand jury. How hard would it have been to have done that on Monday? Not hard at all.

A couple friends and I attended a smaller protest downtown this morning. One of the friends brought her children, who are very close to Eleanor and have all known each other for most of their young lives; her daughter and Eleanor are best friends. This protest is personal for their family as well. My friend's husband is a Black man, and their children have heard their conversations, been asking questions, and are trying to understand the world right now. Eleanor has told me so many times that she doesn't understand why someone would not like anyone just because of the color of their skin, and that her BFF's skin is beautiful. It is heartbreaking to hear these words because it is not fair that this hatred is something we have yet to eradicate, but was also very powerful because it was once again a reminder that no one is born with hate. It is taught.

I don't know what will happen with either of these cases, or the untold number in existence. I don't know if George Floyd's family will get justice, or James Scurlock's, or Breonna Taylor's or Ahmaud Arbery's.

I do know we will not be silent. We will protest. We will march. We will demand change.

No justice, no peace.
Posted by Sarah @ All The Book Blog Names Are Taken at 9:13 PM