Book Tag | Would You Rather 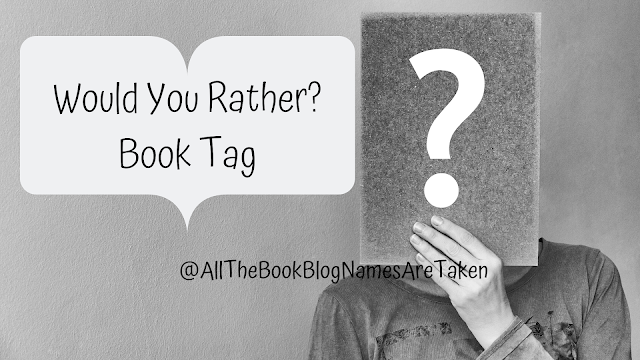 I was tagged by Ashlee at Books Are 42 to participate in a Book Tag this week and I am pretty excited for it because I love answering questions about books and reading and reading and books. I love these, but at the same time I am so terrible at thinking up questions for others to answer. It seems like my mind goes blank when it comes to that part.

First I will answer Ashlee's questions, then I will post the questions for my tags to answer. Then those that I tag answer my questions and come up with more to pass on to their tags, if they choose to do so. No pressure.

1. Would you rather spill coffee/tea on your current read or be forced to read it with greasy fingers?

Yeesh. Greasy fingers are so gross. I don't drink coffee or tea, but I guess I'd rather spill my water on my current read, because my Kindle is water-proof.

2. Would you rather only be able to read new releases or only read backlist books?

I would rather read backlist books, as my historians do not typically publish as quickly as fiction authors do.

3. Would you rather crack the spine of a paperback or dog-ear the pages?

4. Would you rather only be allowed to read the first and last book in a trilogy or have to wait three years for the final book to come out.

Wait three years, definitely. I could not stand to miss out on the middle book.

Standalones. That's how my books typically come anyway. Not many nonfiction trilogies and such.

6. Would you rather your favorite book be turned into a movie or a tv show?

This one is super hard, and I am thinking specifically about One of Us is Lying, and the pilot shot last fall. I'd love the big budget of a movie in order to make sure casting is perfect. But I would appreciate the television show so that all the important stuff can be included, and nothing would have to be cut or condensed. But also the show will eventually run out of material unless there is a next book (which luckily there is, in the form of One of Us is Next). But what about after that?! I don't know! This is so hard!
...
...
...
...
...
Okay, I choose having the book be turned into a movie, because I want that cast to be PERFECT and I am not exactly confident in the choice for Nate in the pilot. A movie budget would allow to get the best actors and actresses, who fit with the character descriptions in the book. I realize I am also being very, very specific about ONE book, but I don't read a ton of fiction, and this is one I can read over and over again.

UGH! Again I am thinking about One of Us is Lying. I would hate to miss my favorite scenes, but if it was badly cast to begin with, would I want the wrong choices to ruin scenes I loved so much and can see in my head? I don't know. This is as tough as the last one. Hmmm.
...
...
...
Okay, I would rather my favorite scenes be left out, because maybe the adaptation comes up with a way to combine them and make them even better.

Easy, my fave author. That would be Dan Jones, for anyone new around here. He's the coolest, and he already knows I am crazy because I harass him on Facebook and Twitter pretty regularly. And there was also that time I MET HIM AT A BOOK SIGNING AND AFTER IT WAS OVER WE TALKED ABOUT ELEANOR OF AQUITAINE FOR A GOOD FIFTEEN/TWENTY MINUTES AND IT WAS AMAZING. We are BFFs now. 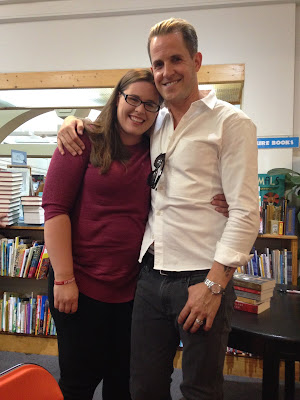 9. Would you rather kill your favorite character or spend the rest of your life with your least favorite villain?

Spend the rest of my life with my least fave villain. Then my favorite character would at least be safe.

I would most definitely choose read only my favorite genre. My fave is history and that encompasses A LOT of topics. Plus my backlog is out of control. We're talking over 3,000 books here, so...

Now comes the hard part, which is thinking up the questions - partly because I am terrible at it, and partly because I do not read nearly as much fiction as I do non-fiction. I am going to do my best to think of some fiction-related questions and don't be mad when questions pop up about my favorite historical figures and dynasties!

Number one is super specific. Sorry. Sort of.

1. Would you have rather have been at court with Eleanor of Aquitaine during her estrangement from Henry II and chat with her on occasion, or be under house arrest with her for fifteen years until Henry II died and Richard I freed her?

2. Would you rather have lived at the court of Henry II or Henry VIII?

3. Would you rather have been Catherine of Aragon, Anne Boleyn, or Jane Seymour?

5. Would you rather have a friend who always loses books you lend them, or only returns them water-logged/with food or drink stains?

7. Would you rather be a professional reviewer or famous author?

8. Would you rather be able to visit your favorite book and talk to your favorite characters once, or visit whenever you wanted, but only as an invisible observer?

9. Would you rather own a bookshop or work at a library?

10. Would you rather only read physical copies or ebooks for an entire year?

This tagging part is much easier than thinking of questions! (The Internet helped a lot.) Participate if you want, or don't, or chat about your answers in the comments with me!

Ethan @ A Book A Week

Lindsi @ Do You Dog-ear?

...and anyone else who wants to join in, feel free!

Happy Reading!
Sarah
Posted by Sarah @ All The Book Blog Names Are Taken at 12:57 AM